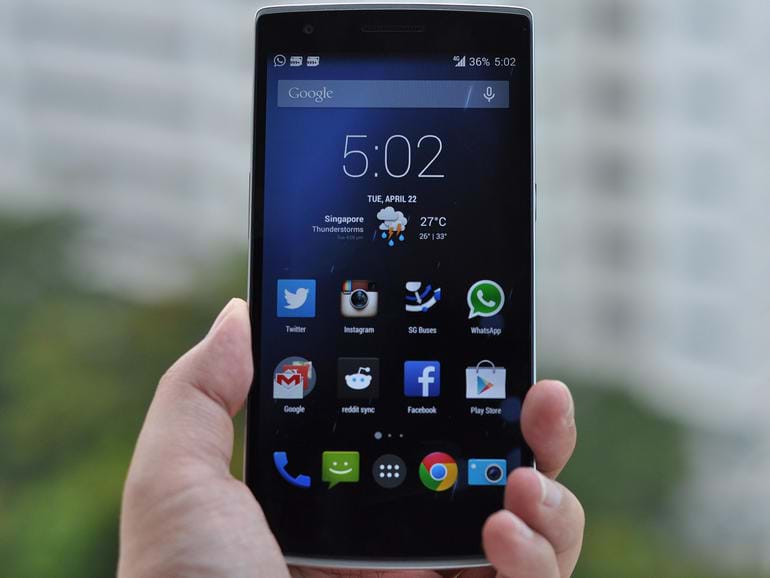 OnePlus has launched its first Android smartphone and it offers high-end specs on the cheap After months and months and months of hype, marketing and viral ad campaigns, the OnePlus One is here. As promised the handset packs in a raft of hardware and specs at a very compelling price point: the handset will retail for £239 (16GB) and £269 (64GB), respectively. Not bad when you consider what this monster of a phone is packing. The marketing campaign behind the handset was, for want of a better word, awesome. OnePlus drummed up interest across the globe, leveraging social, word of mouth and editorial.

The company wasn’t shy about talking about the device, either – or its unique set of business ethics, which can be summed up as follows: build a shockingly awesome phone, pack it with great hardware and features, and give it a fair price. Last time we checked, this was and remains to be an industry first. Inside you'll find a Qualcomm Snapdragon 801 with a quad-core 2.5GHz Krait 400 CPU. That’s the best Snapdragon currently on the market and is featured in a bunch of other flagship devices at the moment like the Samsung Galaxy S5. There’s 3GB of RAM on board as well. The screen is 5.5-inch Full HD with a pixel density of 401ppi. Operating system wise it runs on CyanogenMod 11S which is based on Android 4.4 KitKat.

It comes with its own minimal, flat user interface which is displayed in some of the pictures below. The device even has its own custom themes and icons. “Embracing this design language, the One features subtle curves, sleek lines and a slightly raised, jet-black display. Even the smallest details belong uniquely to OnePlus, from the custom cut and engineered PCB boards to the specially designed battery and dyed inner casing. Each component is meticulously aligned and adorned with a OnePlus logo for a gorgeous device inside and out. "Measuring only 8.9mm thick, the OnePlus One is ergonomic and easy to grip, with a tapered edge of just 4.6mm,” said the company at launch. The design of the handset is quite impressive too.

The company says that, after trying out aluminium and stainless steel, it found the handset was too heavy, so the firm opted for magnesium instead. The phone weighs just 162g and OnePlus reckons it's the lightest 5.5-inch smartphone available right now. Does OnePlus have any regrets about the design? It believes metal borders would have improved the overall design of the phone but it created a bunch of signal issues, so the company decided to lose them. Metal borders also upped the weight of the handset too which, again, wasn't desirable; perhaps OnePlus can work something out for the OnePlus Two.

The whole handset comes in at 152.9 x 75.9 x 8.9mm whilst the edges measure at 4.6mm. Dual stero speakers feature at the bottom of the handset which had some work from audio company JBL involved. We’ve already seen some snaps from the OnePlus One but we didn’t know how strong the camera was. It’s a 13 MP Sony IMX214 Sensor which has 6 lenses and f/2.0 Aperture. It allows 4K video recording and there’s a quick shutter speed of 0.3 seconds. Inside to power it all there’s a non-removable 3,100mAh Li-Po battery. There’s the option of a 16GB or 64GB storage version too.

The phone itself also features support for “Always-On” voice commands, similar to the Moto X, as well as gesture-based controls, whereby the user can assign different commands to different gestures for quicker, more efficient interaction. You can change the back cover of the OnePlus and the company has launched StyleSwap covers to accompany it. Designs to choose from are bamboo, wood, denim and Kevlar. Being able to swap and change is quite reminiscent of the Moto G.