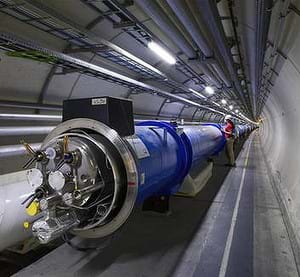 What is the God particle? The God particle is just a fancy name for a sub-atomic particle called the Higgs Boson. This particle is the last piece of mystery in the Standard Model, which is a model containing all the elementary particles and intending to explain all particle interaction in particle physics. Higgs was proposed by three teams of theorists in 1964: François Englert and Robert Brout, Gerald Guralnik, C. R. Hagen, and Tom Kibble (GHK), and Peter Higgs, whom the particle was named after. Higgs is known to be the last particle which holds a critical explanation of where the mass of all matter comes from. What is mass and where is it from? Mass is a measure of how much matter is contained in an object. We know mass exists because we feel the gravitation as our weight. Our weight changes depending on which planet we’re on, depending on its mass and radius. However, our mass never changes. What exactly was discovered? The particle that was discovered and announced yesterday by CERN is a Higgs-like particle at 5-sigma significance, which is the standard to claim a discovery in particle physics. This number translates to a 99.9999 percent confidence level that the observed event is not a statistical fluctuation. Higgs-likes means it has some of the properties that agree with the predicted properties of the Higgs bosons; however, there are other properties needed to be tested with more data. It is still a new particle, regardless, but whether it’s the Standard Model Higgs or not has yet to be confirmed. If it is the Standard Model Higgs then the Standard Model is complete. If not then we might need other models or theories to explain the whole thing in a coherent way. If this particle is really the Higgs Boson, it will give us an explanation of where mass comes from, in other words, our origin.

Cybercriminals are using Google reCAPTCHA to hide their phishing attacks 724