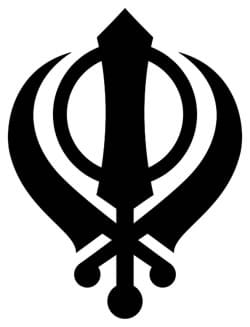 Introduction To Sikhism Website
Sikhism was founded in the Punjab region of what is now India and Pakistan. It was founded by Guru Nanak(1469-1539 CE) who was followed by 9 successor Gurus last of who was Guru Gobind Singh (1666-1708 CE). Guru Nanak taught that we are all children of that one almighty God. who is Creator of all. Baba Nanak was a contemporary of Ibrahim Lodhi (the Afghan ruler of Delhi) Babar and Humanyun (the Mughal Emperors of Delhi). Nine Gurus succeeded Guru Nanak and nur¬tured the Sikh faith and community over two centuries. The fifth Guru - Guru Arjun (1563 -1606 CE) established Amritsar as the capital of the Sikh world and compiled the Sikh scripture — Adi Granth, which is now known as Guru Granth. The tenth Guru Gobind Singh established the Sikh rite of initiation (called khandey di pa-hul) and the 5 Ks which give Sikhs their unique appearance. Guru Gobind Singh was the last corporeal Guru of the Sikhs. [b]Sikh Scripture[/b] "Guru Granth", Sikh scripture, is considered the 1 llh and the eternal Guru. It consists of hymns and writings of the Gurus and other men-of-God. [b]Core Beliefs[/b] Sikhs core beliefs include: 1. Belief in One God God is without form or Gender Everyone may have direct rela¬tionship with God Everyone is equal before God 2. Man can become one with God only by living a life within God's Will. By breathing every breath in God's presence, the Sikhs be¬lieve, one may experience God. To do this a person must switch the focus of their attention from themselves to God. They get to this state, which is called sachkhand (realm of truth), through the grace of God. 3. Sikhs believe that human life form is a chance for a being to work towards union with Creator. 4. Sikhs believe that God is inside every person - hence no one is bad, only one's actions may be bad. [b]Sikh P[/b] 1. [i]Kirt Kama[/i]: Earning an honest living. Since God is truth, a Sikh seeks to live honestly. This doesn't just mean avoiding crime: Sikhs avoid gambling, beg¬ging, or working in the alcohol or tobacco industries. 2.[i] Nam japna[/i]: Keeping God in mind at all times. 3. [i]VandChhakna[/i]: Literally, sharing one's earnings with others, giving to charity and caring for others. [b]Five Urges[/b] Sikhs work to control the five urges, which if allowed to control one. take one away from God. These are: 1. Lust 2. Anger 3. Covetousness and greed 4. Possessiveness 5. Pride If a person can overcome these vices they are on the road to union with God. [i]This Article Originated from Religious Founders Day (Theme: Establishing Peace Through Religions) symposium organised and hosted by the Ahmadiyya Muslim Jamaat in New Zealand on the 13th of November 2010[/i]