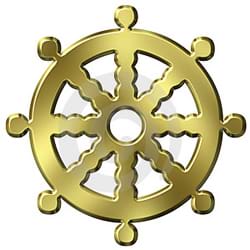 Introduction To Buddhism Website
Buddhism is an old religion founded in India in the sixth century BC and named after its founder, Prince Siddharta Guatama Budha(Peace be upon him)(560-480 BC). At a very young age, the Bhudha became deeply affected by the great suffering and pain that existed in the world. At the age of 29 he left his family, renounced his princely status and went out searching for the answers to these problems. He wandered from place to place in search of wisdom for six years, until he realized enlightenment. Since that day he has been known as the Budha or the Awakened One The Budha lived for about eighty years and taught his new-found wisdom all over India for the last 45 years of his life. Consequently, Budhism was the first missionary religion of the world where the followers of the Budha carried this faith to other countries and peoples. [b]Sacred Books[/b] There is no single sacred text of Bhudhism. Rather there is a vast library of texts that have been considered authoritative by various schools of Buddhism. Among the oldest texts are those included in the Pali Canonn [b]Core Beliefs[/b] Buddhist believe in The Law of Kamma (or Karma), which states that there are inescapable results of our intentional actions. Understanding this natural law of cause and effect leads to an ethical, compassionate and wise way of living. Training and Practices The three trainings and practices consist of 1. Sila - Virtue, good conduct, morality 2. Samadhi - concentration, mediation, mental development 3. Panya - Discernment, insight, wisdom, enlightenment [b]The Four Noble Truths[/b] These explore human suffering and may be described (somewhat simplistically) as 1. Dukkha - Suffering exists 2. Sumudaya — There is a cause for suf¬fering 3. Nirodha - There is an end to suffering 4. Magga — In order to end suffering you must follow the Eightfold Path [b]Eightfold Path[/b] Panya: Discernment, Wisdom 1. Right understanding of the Four Noble Truths 2. Right thinking, following the Right Path in Life Sila: Virtue, Morality 3. Right speech: no lying, criticism, condemning, gossip, harsh language 4. Right conduct by following the five precepts 5. Right Livelihood; support yourself without harming others Samadhi: Concentration, Meditation 6. Right Effort; promote good thoughts, conquer evil thoughts 7. Right Mindfulness: become aware of your body mind and feelings 8. Right Concentration; Mediate to a chieve a high stat of consciousness [b]Five Precepts[/b] These are the recommended rules to live by 1. Do not kill 2. Do not steal 3. Do not lie 4. Do not misuse sex 5. Do not consume alcohol or other drugs [i]This Article Originated from Religious Founders Day(Theme: Establishing Peace Through Religions)symposium organised and hosted by the Ahmadiyya Muslim Jamaat in New Zealand on the 13th of November 2010[/i]