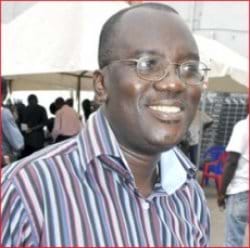 Kwadwo Owusu Afriyie is the General Secretary of the NPP


The main opposition New Patriotic Party has thrown its weight behind the NDC government's stance on the issue of homosexuality in Ghana.

A statement signed by the party's General Secretary, Kwadwo Owusu Afriyie, said the "NPP urges government to stand firm in the face of such unacceptable offenses against our sovereignty."

Below is the full statement:

The New Patriotic Party (NPP) has observed with satisfaction the widespread condemnations that have greeted the unfortunate statements of Mr David Cameron, the prime minister of the United Kingdom.

In every respect, the prime minister’s statements were in bad taste.

Therefore what Mr. Cameron should not attempt to do is to coerce Ghana into compromising our cultural norms and laws for the purpose of advancing UK’s foreign policy objectives.

The clarification by Downing Street that the prime minister’s statement “was in the context of British foreign policy to promote human rights around the world” does not also help the matter.

Ghanaians are capable of discussing the subject of homosexuality and taking the necessary steps to uphold our laws, to preserve our cultural values and protect the human rights of all our citizens.

It is not a matter foreign governments can decide for us.

The New Patriotic Party urges government to stand firm in the face of such unacceptable offence against our sovereignty.