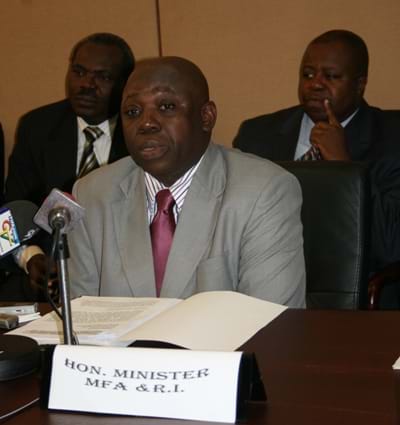 Alhaji Muhammed Mumuni, Minister of Foreign Affairs and Regional Integration on Thursday unveiled plans by the government to seek the release of four Ghanaians being held captive by Somali Pirates since 2010. He said government would continue to pressurise the management of Azal Shipping, the shipping vessel on which the Ghanaians are held captive to secure their release. So far efforts by Ghana's Mission in Dubai to contact the ship owners for confirmation of reports of the release of the captives have proved futile Alhaji Mumuni said this on the floor of Parliament when answering a question tabled by Ms Shirley Ayorkor Botchway on the issue. However, he said a telephone call from one Mr Francis Koomson, one of the detained crew, seemed to contradict news of their release, saying the ship is sinking while the pirates had threatened to kill them. Alhaji Mumuni said apart from the four Ghanaians, the 24 member crew included nationals from Yemen, India, Sudan and Philippines. He said on September 7, 2010, the Ministry received a written report from one Michael Ahiable to the effect that his brother Jewel Ahiable and three other Ghanaians, namely Koomson, Edward Asare and Prince John Agbo who were part of the crew of some 24 sailors on board MV Iceberg I, had been detained by Somali pirates that had hijacked the vessel on March 29, 2010. Alhaji Mumuni said this followed investigations carried out by the Ministry with the assistance of Ghana’s Mission in Addis Ababa, Cairo, Dubai, Kuala Lumpur, New Delhi, Riyadh and Tehran, which confirmed the report. He said the Ministry explored various options to secure the release of the Ghanaians through diplomatic approaches to some of the countries whose nationals were involved. Alhaji Mumuni said in October this year, the Ministry received information from various sources including the Indian Consulate-General in Dubai and media reports in the Dubai-based English daily, the Khaleej Times in its October 25, 2011 edition that the vessel and its crew were released on Friday, October 21. The publication also disclosed that an undisclosed sum was paid as ransom by the ship owners to secure their release. Alhaji Mumuni noted that government's policy was against payment of ransom as that would make Ghanaian crew members of every vessel deliberate targets of piracy, not only by Somali pirates, but also by pirates everywhere.

We Will Be Fair To All Contestant NDC 416