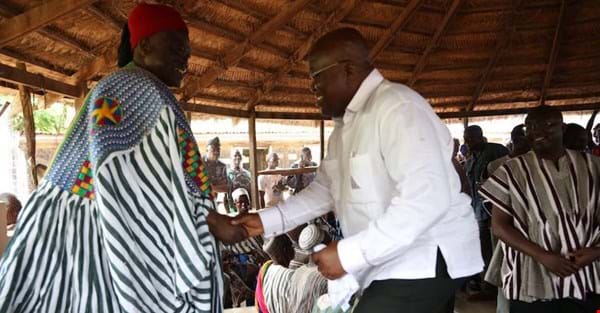 The 2016 presidential candidate of the New Patriotic Party, Nana Addo Dankwa Akufo-Addo, has stated that his government, ‘God-willing’, from January 2017, will prioritise the development of agriculture in Northern Ghana by establishing and increasing the number irrigation systems in play.   According to Nana Akufo-Addo, the only way to increase the total land area under cultivation in Ghana, which currently stands at a mere 30,000 out of 14 million hectares of arable land, is for the country to develop more irrigation systems. “You have been hearing me talking about 1-District-1-Factory. As far as this part of the country is concerned, I even want to go further and talk about “1-village-1-dam”, to make sure that in every village, we have a functioning dam to support agriculture. If Ghana’s agriculture is working well, the nation is capable of feeding West Africa,” he said. Nana Akufo-Addo made this known on Sunday, August 28, 2016, when he was addressing the Bolgatanga Traditional Council, on the 2nd day of his tour of the Upper East Region. In his remarks, the NPP flagbearer explained that an NPP government, under his leadership, is going to ensure that “our lands have the water for a buoyant agriculture. We want to be able to make sure that the entire northern sector of our country, which is a potential bread basket of Ghana, has the irrigation platform to make agriculture work.” He continued, “You are close to Burkina Faso, and you know what is going on there. They are able to conserve water and irrigate their lands. They are exporting vegetables, fruits, amongst others. With all the problems they have politically, their agriculture is working. We are at peace and ours is not working, because we don’t have correct policies. We believe we can put in correct policies to make agriculture work.” Addressing the concerns of funding for this initiative, Nana Akufo-Addo assured that “the money is there.” However, he noted that “a lot of it is going into people’s private pockets and not developing the nation.We cannot continue along that road where contracts are inflated and half of the money that should be used in developing the welfare of our people is going into private pockets.” The NPP flagbearer assured that “if you give me the opportunity to serve you, that is going to end in Ghana. We are going to bring to an end to it. I have said it before and I want to repeat it. If anybody wants to make money, stay in the private sector. Once you cross over to the public sector, it is about public service.” SADA has become a monumental failure Nana Akufo-Addo noted that it was a sad spectacle to see President Mahama, in his recent tour of the Northern Region, failing to talk about the Savannah Accelerated Development Authority (SADA), in his interaction with the people.
This, according to Nana Akufo-Addo, is because “SADA has been a monumental failure. It has been a vehicle for public money going down the drain. Money that should have been used to establish the basis of a performing agricultural sector in the North has gone into people’s pockets.” It will be recalled that in the run-up to the December 2008 elections, Nana Akufo-Addo pledged to establish a Northern Development Authority (NoDA) and a Northern Development Fund, vehicles which will help bridge the developmental gap between the North and the South. Nana Akufo-Addo recollected that the then NDC vice presidential candidate, John Mahama, “laughed at it. He said if I was talking from the back of my head, and that if I could find any monies for the Northern Development Fund, I should use that to pay the debts of VRA. When they came to power, they decided it was a good idea after all and brought us SADA.” “Today, the President can tour the 3 regions of the North and cannot mention SADA – an initiative which he says is his baby. He cannot mention SADA anymore, because it has become a big failure. We are going to re-establish the NoDA and pay attention to the infrastructural deficit in the North,” he reassured.