Kufuor back home from G-20 Meeting in Seoul 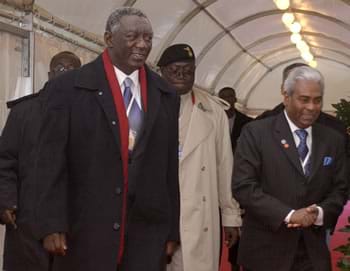 
Accra, - Former President John Agyekum Kufuor returned home on Monday from Seoul, South Korea, after attending the preparatory meeting of the G-20 as representative of the Club of Madrid, the largest grouping of former democratically elected heads of state. South Korea assumes presidency of the G-20 in November 2010 and will host the summit under the theme: "G-20's Role in the Post-Crisis World." A statement signed by his Spokesperson, Mr Frank Agyekum, said Former President Kufuor told the Summit in his speech that the G-20 should play a more proactive role in issues affecting the well-being of developing countries. He said as a group of countries, many of whose members have just broken away from the ranks of developing countries, they stood in a peculiar position to articulate the difficulties that these countries faced and to help find solutions to them. Former President Kufuor, who gave an African perspective to the formulation of the G-20 Africa policy, appealed to donor countries to fulfill their promises to developing countries to enable them to ease their problems. The meeting was attended by Mr Jorge Quiroga, Prime Minister of Bulgaria, Mr Hong Koo Lee, former Prime Minister of South Korea, Mr Philip Dimitrov, former President of Bolivia and a select group of policy specialists, academics and authors. Former President Kufuor also delivered a speech on 'Korea-Africa Relations in a Changing World' at 'The Distinguished Speaker Lecture' series at the Korea Foundation Forum at the invitation of the South Korean government. The lecture series had previously been addressed by former US President George W Bush, Mr John Howard, former Prime Minister of Australia, Mr Newt Gingrich, former speaker of the US House of Representatives, Mr Colin Powell, former US Secretary of State, Mr Koichiro Matsuura, the Director-General of UNESCO on Cultural Diversity, and Mr John Hood, Vice Chancellor of Oxford University.