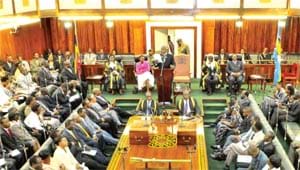 President Yoweri Museveni delivering his State of the Nation Address


UGANDA’S economy is growing very fast, President Yoweri Museveni has said. Addressing the nation yesterday, the President said the country can now largely sustain itself and embark on the construction of roads and energy infrastructure without external funding. “Uganda is now ‘undelayable’ and unstoppable. I am happy,” the jovial Museveni said in his address to the nation,which will be the last before the elections next year. He said the economy had grown at 7.4% over the last 24 years, but had shot up to 8.4%. This, he noted, had resulted in a six-fold increase in the size of the economy. He attributed the expansion to the rapid growth of the industrial and service sectors. “Some people expressed pessimism when I said our economy would survive the global downturn. The economy has proved that what I stated was correct.” The size of the economy in 2009 was sh34.2 trillion ($17b). This means on average, each of the 31 million Ugandans earned $540 (sh1.08m) last year. “Until a few years ago, only the economy of Kenya had a GDP of $12b. Uganda has now surpassed Kenya where it was at that time, of course Kenya has moved on also,” Museveni observed. He noted that the economy thrives amid power shortages and poor roads. “If we are growing at an average of 8% with power shortages, what would have happened if we had enough electricity?” Museveni asked: “Can you imagine what we are going to do when our tax collection goes up?” Museveni also noted that the road conditions have improved because several major roads have been worked on or are in the process being repaired. “We wanted to build a road along the lake but rich people like Bukenya (Vice-President) have built there,” he said as MPs burst into laughter. The President admitted that the agricultural sector has performed poorly due to weather changes and lack of value addition. In order to retain scientists, Museveni ordered the finance ministry to raise their pay to international levels. Remittances from Ugandans working abroad rebounded to $76m per month. Other aspects show improvement in the quality of life of Ugandans including telecommunication usage, which stands at 12.1m mobile phone subscribers and about 2.5 million use the Internet. The Government has set up a regional centre of excellence for research and training in rice production at Namulonge. On energy, the President said 65% of civil works at Bujagali has been completed and the first 50MW will be commission on October 2011. Work on the Karuma project starts next year. The President said the oil reserves are commercially viable. “Uganda has not exported any drop of its discovered oil. Those peddling lies that oil is already being sold abroad should stop.” He said a company wants to pay $1.35b to buy the shares of Heritage in Uganda. According to Ugandan law such a sale attracts 30% tax. He said Uganda will get $400m in taxes once the company sells off its Uganda interests. Museveni also directed the Ministry of Education to build at least one secondary school in each sub-county and one vocational institution in every district. The address to Parliament marked the opening of the 5th and last session of the Eighth Parliament. After the address, the President received a standing ovation from the NRM MPs who kept chanting, “No change”. Opposition MPs remained seated. Speaker Edward Ssekandi chided the opposition for their behaviour, saying even in the US every member stands up after the State-of-the Nation Address. The House was also thrown into a frenzy when the newly-sworn in Mukono north MP, Betty Nambooze, shook hands with the President after the address. Earlier, he also joked with the recently suspended MP Christine Abia. He said she was “now a good girl”.