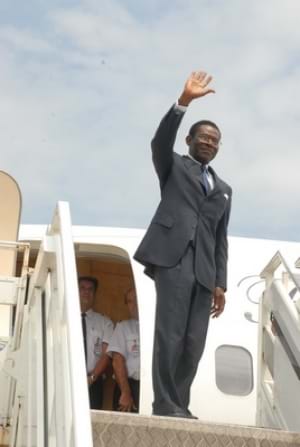 President Teodoro Obiang Nguema Mbasogo bids ‘goodbye’ at the airport as he leaves at the end of his visit.


President Teodoro Obiang Nguema Mbasogo of Equatorial Guinea yesterday ended his three-day visit to Ghana with the signing of seven high level bilateral agreements that have set the stage for stronger economic cooperation between the two countries. The agreements, which were signed prior to the departure of the visiting President and his delegation, are aimed at advancing trade and investment between Ghana and Equatorial Guinea to give meaning to the need for more south-south cooperation to address common challenges facing the two nations. The agreements, signed by the respective sector Ministers of both countries in the presence of the two leaders, were for of cooperation in hydrocarbons and energy, education, maritime transport, fishing, labour and social security, promotion of women and gender equity, and tourism development. “These agreements constitute a strong foundation for co-operation between our two countries,” President Mills said after the signing. He described the visit which culminated in the agreements as worthy, saying “we have made significant progress.” President Mills expressed government’s commitment to the objective of the agreements, and pledged to ensure that they were actualized for the desired benefits to be realized. He also expressed appreciation to President Mbasogo for honouring the invitation to visit Ghana , saying it has been very useful in strengthening the ties between their countries. “We will build on the foundation that have been laid for fruitful cooperation between our nations,” he pledged. President Mbasogo, for his part, thanked President Mills for the honour done him, and he too pledged his government’s commitment to the agreements.