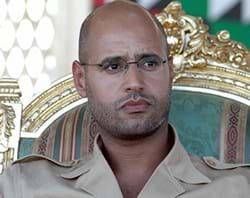 
Saif Al Islam may surrender to ICC, seek refuge elsewhere ICC fears son of Libya's Gaddafi may flee justice The International Criminal Court said on Saturday that Libya's Saif Al Islam Gaddafi was in contact via intermediaries about surrendering for trial, but it also had information mercenaries were trying to spirit him to a friendly African nation. US military and government representatives held security talks in neighbouring Niger with local officials in Agadez, which has been a way station for other Libyan fugitives, including another son of Muammar Gaddafi, Saadi. A Reuters reporter saw a US military plane at Agadez airport. A top Agadez regional official declined to say what the talks with the Americans were about, but spoke of escape plans by Saif Al Islam and former Libyan intelligence chief Abdullah al-Senussi, both wanted by the ICC for crimes against humanity. "Senussi is being extricated from Mali toward a country that is a non-signatory to the (ICC) convention. I am certain that they will both (Senussi and Saif Al Islam) be extricated by plane, one from Mali, the other from Niger," said the official, who asked not to be named. He said there were at least 10 airstrips in the north of Niger near the Libyan border that could be used to whisk Saif Al Islam out of the country. A member of parliament from northern Mali, Ibrahim Assaleh Ag Mohamed, denied Senussi was in his country and said neither he nor Saif al-Islam would be accepted if they tried to enter. The arrival of the US delegation followed remarks by Mohamed Anako, president of Agadez region, who said he would give Saif Al Islam refuge. "Libya and Niger are brother countries and cousins ... so we will welcome him in," he said. The ICC has warned Saif Al Islam, 39, apparently anxious not to be captured by Libyan interim government forces in whose hands his father Muammar Gaddafi was killed last week, that it could order a mid-air interception if he tried to flee by plane from his Sahara desert hideout for a safe haven. INDIRECT CONTACTS The ICC's comments offered some corroboration of reports from Tripoli's National Transitional Council (NTC) leaders and African neighbours that he has taken refuge with Tuareg nomads in the sparsely-populated borderlands between Libya and Niger. A group of about 100 people from a desert town near where Saif was last believed to be hiding demonstrated in Tripoli on Saturday, saying that towns and villages in the area were under constant attack from bands of pro-Gaddafi mercenaries. "They are the men of Gaddafi and they are attacking villages, killing people, stealing cars," Mohammed Hassan told Reuters. "They don't recognise the new flag." The demonstrators, from the town of Mausq in the southern Libyan desert, said they believed the men were from Chad. They had no information on the whereabouts of Saif Al Islam. ICC Prosecutor Luis Moreno-Ocampo told Reuters in an interview that communication with Saif Al Islam was being made possible by "intermediaries", despite his remote location. "There are some people connected with him that are in touch with people connected with us," Ocampo said during a visit to Beijing. "We have some information that there is a mercenary group trying to help him to move to a different country, so we are trying to prevent this activity," said Moreno-Ocampo. "We are also working with some states to see if we can disrupt this attempt. Some of them are South Africans allegedly." Moreno-Ocampo said the ICC was not making any deal with Saif Al Islam but was explaining through the contacts that he had to face trial because he had been indicted for war crimes. "He says he is innocent," said the prosecutor. However, surrender is only one option for Saif Al Islam. The Gaddafis befriended desert tribes in Niger, Mali and other poor former French colonies in West Africa. Other African countries received Libyan largesse during the 42-year rule of Gaddafi, a self-styled African "king of kings". France, a backer of February's revolt against Gaddafi, reminded African states of their obligations to hand Saif al-Islam over to the international court. "We don't care whether he goes on foot, by plane, by boat, by car or on a camel, the only thing that matters is that he belongs in the ICC," said Foreign Ministry spokesman Bernard Valero. Niger, Mali, Chad and Burkina Faso, a swathe of arid states to the south of Libya, are all signatories to the treaty that set up the ICC. Algeria, which took in Saif Al Islam's mother, sister, brother Hannibal and half-brother Mohammed, is not a signatory. Nor is Sudan or Zimbabwe.