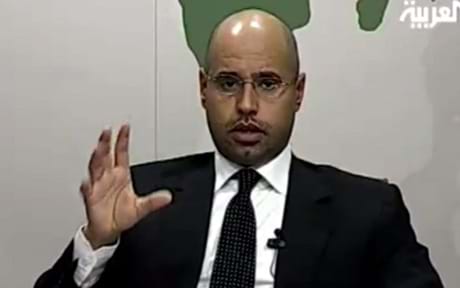 
Saif al-Islam - the son of slain ex-Libyan leader Muammar Gaddafi - says he is innocent of crimes against humanity, an international prosecutor has said. The International Criminal Court (ICC) Prosecutor Luis Moreno-Ocampo said talks with Saif al-Islam had been held through intermediaries. The ICC says Gaddafi's son, accused of crimes during the recent conflict in Libya, would get a fair trial. Saif al-Islam, aged 39, has been in hiding for months. Recent reports claimed the man, who had once been the presumed successor to his father, was in a convoy heading toward Libya's desert border with Niger, where other Gaddafi allies have fled. But those reports have not been confirmed, and the ICC says it does not know where he is. Prosecutor's fears Mr Moreno-Ocampo told Reuters that the contacts with Saif al-Islam were through intermediaries, without revealing their identity. "There are some people connected with him that in touch with people connected with us, so we have no direct relation," the prosecutor said. He added: "But we trust very much the person who is in touch for our side. He says he (Saif al-Islam) is innocent, he will prove he is innocent, and then he is interested in the consequence after that." Mr Moreno-Ocampo earlier expressed fears that Saif al-Islam might decide against surrendering to the ICC and try to escape to a friendly country with the help of mercenaries. The ICC denies that any kind of deal is being arranged with Saif al-Islam, stressing that the goal of the talks is to ensure an arrest warrant is carried out. An ICC arrest warrant issued for Saif al-Islam in June accuses him of murder and persecution. The document claims that he played an essential part in systematic attacks on civilians in various Libyan cities carried out by Gaddafi's security forces in February. Mr Moreno-Ocampo said the ICC had learnt "through informal channels" that mercenaries were offering to move Saif al-Islam to a country that has not signed up to the ICC's Rome statute. Reports say Zimbabwe is a likely final destination for Saif al-Islam if he chooses to flee from the ICC. Zimbabwean President Robert Mugabe was a long-time ally of Muammar Gaddafi. ICC difficulties The ICC has no police force of its own, but member countries are legally bound to enforce its warrants. However, the credibility of the court has been called into question in recent years in Africa. Many of the continent's governments have argued that the ICC disproportionately focuses on crimes in their countries. Those claims have led the African Union to advise its members that they should no longer feel bound by the ICC's rules. Member countries including Malawi, Chad and Kenya have all defied the court by failing to arrest Sudanese President Omar al-Bashir, who has a long-standing arrest warrant against him. The warrant issued against Saif al-Islam came alongside warrants for intelligence chief Abdullah al-Sanussi, who is still believed to be on the run, and Muammar Gaddafi. The former Libyan leader, who was deposed in August after six months of civil conflict, died from gunshot wounds last week after fierce fighting in the city of Sirte. The National Transitional Council (NTC) is now overseeing political reform intended to lead to national elections within eight months.