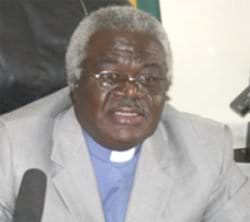 
The moderator of the Presbyterian Church of Ghana, Rev. Professor Emmanuel Martey, has in unequivocal terms condemned the British Prime Minister, David Cameron for his threat to cut aid to anti-gay countries. Mr. Cameron in an interview with BBC One’s Andrew Marr Show, threatened to withhold UK aid from countries including Ghana that do not reform legislation banning homosexuality, adding that nations receiving UK aid should "adhere to proper human rights." "Britain is one of the premier aid givers in the world," Cameron said. "We want to see countries that receive our aid adhering to proper human rights." Some 41 nations within the 54-member Commonwealth have laws banning homosexuality. Many of these laws are a legacy of British Empire laws. Speaking to the host of the Citi Breakfast Show Bernard Avle on Monday, Professor Martey stated that the Government of Ghana must not adhere to the threat by the UK Prime Minister and must use this opportunity to wean itself from donor countries like Britain. According to him, Mr. Cameron lacks global understanding of cultural values of people in the Commonwealth nations saying that the British PM should refrain from his “constitutional dictatorship”. “It is unfortunate that the Prime Minister is attaching aid to the issue of homosexuality and his main argument is human rights, if the PM is interested in human rights which all decent people ought to, this is not the best way to go about it. “Unfortunately, the PM appears to lack global understanding of people’s cultural values. If one wants to destroy a people; one has to destroy their cultural values. "The Prime Minister should refrain from what could be called juridical or constitutional dictatorship. ..does the PM understand what a taboo is, does he understand what the Bible calls an abomination, what this young man is advocating is very offensive to us Africans. He should refrain from this if he really believes in democracy and human rights.” Professor Martey stated that the destiny of Ghana does not lie with the support of Britain and asked Ghanaian leaders to be “wise” and decline accepting any form of aid from foreign countries with conditions that would seek to plunge the future of Ghanaians into perpetual destruction. UK is Ghana’s biggest bilateral aid donor and the country enjoyed some 85 million pounds from Britain last year and risk losing a total of 375 million pounds over the next five years if Ghana and other anti-gay nations remain adamant and allows Britain to go ahead with its decision to cut aid.