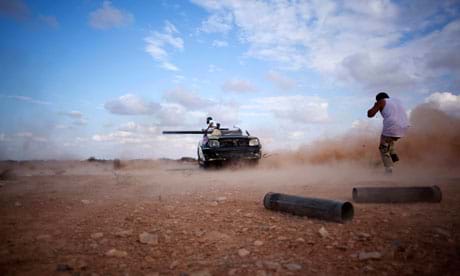 Libyan rebels outside Sirte in Libya


Aid workers enter Gaddafi's hometown as civilians flee amid fighting between rebels and forces loyal to ousted dictatorAid workers have made it into Muammar Gaddafi's besieged hometown of Sirte amid fears that a humanitarian crisis could unfold amid continued heavy fighting between revolutionary forces and fighters loyal to the ousted dictator. The arrival of the International Committee of the Red Cross (ICRC) on Saturday came as hundreds of people continued to stream out of Sirte and forces allied to the interim government intensified their shelling of the coastal city. Fighters from eastern Libya have seized control of Sirte's first residential district and a hotel where pro-Gaddafi snipers were based, according to a rebel commander. "There is heavy fighting going on in the streets of Sirte right now," said Mustafa al-Rubaie. "The enemy is besieged from the south, east and west, but it's still in possession of highly sophisticated weapons and a large amount of ammunition." Gaddafi forces were also in control of strategic positions inside the city, including high-rise blocks where snipers are positioned, slowing the advance of the revolutionary forces. "The plan is that the eastern and western forces will meet in the middle of Sirte," Rubaie said. "When we reach this point, we will celebrate the liberation of Sirte." Rubai said although the fighters had surrounded Sirte from all sides, a path out had been left for civilians who still wanted to leave the city. A truckload of supplies and two cars carrying European ICRC workers arrived at a checkpoint manned by fighters loyal to the ruling National Transitional Council (NTC). Some NTC commanders said they would try to allow the foreign workers safe passage into the city but shelling continued. An ICRC worker, Karen Strugg, told Reuters her colleagues had made it inside. "They're inside delivering medical aid. And they want to come out," said Strugg from a road leading into the centre. A doctor at a frontline hospital said a family of four from Sirte had been killed while driving toward the revolutionaries' positions. It was unclear who killed them. Dr Nuri Naari said the bodies of two children and their parents were brought to his makeshift hospital early this morning, adding that they had died from machine-gun fire. After weeks of fighting inside Sirte, forces loyal to the NTC say they now hold positions about three miles (5km) from the city centre. The Libyan defence ministry has said the fighters also seized Sirte's port, military base and airport last week. Sirte is one of only two main remaining strongholds still held by pro-Gaddafi forces and the NTC has failed to take it with several assaults in the past two weeks. The UN and humanitarian organisations such as the ICRC have warned that there may be civilian casualties in the city and that living conditions are dire. Doctors at a field hospital outside Sirte told Reuters that one woman had died of malnutrition there, and that they had seen other cases of malnutrition.