Whereabouts of Gaddafi Unknown as Rebels Close In 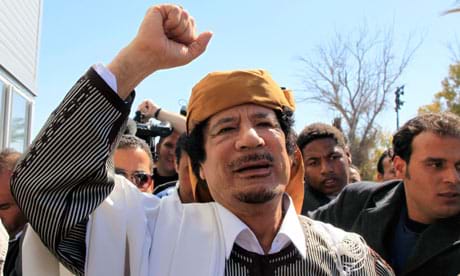 
His voice was broadcast across Libya on state television on Sunday night – but nobody seems to know for sure where Muammar Gaddafi actually is. A rebel spokesman in London was reported to have claimed that the eccentric despot could perhaps have fled to neighbouring Algeria, but this could not be confirmed. Agence France Presse reported an unnamed diplomat as claiming that Gaddafi was still in Tripoli and "could be" in his compound in Tripoli, a rabbit-warren of tunnels and rooms that has been the target of repeated Nato air strikes. But this could not be confirmed, either. From the beginning of the six-month conflict, the dictator has proved elusive. In February, just after the fall of Benghazi, the foreign secretary, William Hague, claimed with confidence he had information indicating Gaddafi was already on his way to Venezuela. This proved not to be the case. Hours later, Gaddafi was pictured on television speaking from a car and holding up an umbrella. "I want to show that I'm in Tripoli and not in Venezuela," he said. "Do not believe the channels belonging to stray dogs." The whereabouts of other members of the clan are a little more certain. Saif al-Islam, the son once seen as Gaddafi's debonair heir who is now wanted by the international criminal court (ICC) along with his father for crimes against humanity, was captured on Sunday. Mustafa Abdel-Jalil, the head of the National Transitional Council (NTC), refused to give details of the arrest, but Fathi al-Baja, a rebel spokesman, told the Associated Press that a renegade commander had directed rebels towards the hotel where the 39-year-old had been hiding. The ICC said it would be in contact with the rebels on Monday to discuss Saif's transfer for trial. Gaddafi's eldest son, Muhammad, also appeared to have been cornered as he was shown on al-Jazeera television saying his house had been surrounded by armed forces. "They have guaranteed my safety. I have always wanted good for all Libyans and was always on the side of God," he said during the interview, which ended abruptly when Muhammad, the head of Libyan telecommunications, said rebels had entered his house and the line went dead. A rebel spokesman confirmed to Reuters that he had surrendered. Reports stated that Saadi Gaddafi, a footballer, had also been arrested by the rebels, but this could not be confirmed. Guma el-Gamaty, the London-based co-ordinator for the NTC, said he believed Gaddafi's other sons – he has seven – were either hiding or had fled. The whereabouts of his daughter, Aisha, also remains unknown.