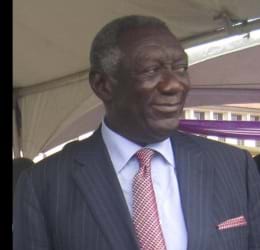 Former President John Agyekum Kufuor has left Accra for London on his way to the US to pick up his prize as joint winner of the 2011 World Food Programme Prize. The other winner is former Brazilian President Lula da Silva who together with former President Kufuor will share the prize money of 0,000.00 A statement signed by the former President’s Spokesperson, Mr Frank Agyekum, said the two were honoured for supervising drastic reduction of hunger and poverty as well as implementing polcies that alleviated hunger and poverty in their countries during their tenure in office. Highlight of the five-day event will be the award ceremony at the Iowa Capitol on October 13 which will be addressed by both laureates. Former President Kufuor will deliver the keynote address at the World Food Prize Laureate Luncheon at the Marriot Hotel on October 14 where he will be presented with the Laureate Diploma by Mr John Ruan III and Dr Kenneth Quinn, Chairman and President respectively of WFP. Other events former President Kufuor will be engaged in include addressing a breakfast seminar on: “Getting Down to Business: Scaling Up Private Sector Investments in Africa and making Headway with Feed the Future“ organized by the Partnership to Cut Hunger and Poverty in Africa. He will also address a meeting on: “Challenges of Natural Resource Management for Small-scale farmers on Marginal lands” organized by the U.S. Department of Agriculture/Foreign Agricultural Service and hold talks with representatives of the Partnership for Child Development. Before leaving for the US, former President Kufuor will attend the 15th Forum 2000 conference in Prague, the Czech Republic, from October 09 to October 011. The conference on the theme Democracy and the Rule of Law will be addressed by former Czech President Vaclav Havel, former Nigerian President Olusegun Obassanjo and Joseph Stiglitz, Nobel Prize Luareate in Ecconomic Sciences, among others. Former President Kufuor will speak on: ‘Perspectives of Democracy and the Rule of Law in the 21st Century.’ The former President, who will be accompanied by his wife, former First Lady Teresa, is expected back on October 20.