Brazil legend Ronaldo has reiterated his belief that Santos forward Neymar should move to Europe to enhance his career. The 19-year-old has been the subject ...

10 Oct 2011
Share This
Article:
Font size:
Write a Comment Report
Print
Brazil legend Ronaldo has reiterated his belief that Santos forward Neymar should move to Europe to enhance his career. The 19-year-old has been the subject of transfer speculation for the past several months, with Spanish giants Real Madrid and Barcelona said to be keen on signing him and have already approached Santos for his services. Neymar himself has stated that he will not leave his homeland before the summer of 2012, but Ronaldo, who moved to Dutch giants PSV when he was a teenager and went on to play for Madrid, Barcelona, AC Milan and Inter, asserts that playing in Europe will make him 'the best player in the world'. "Leaving aside selflessness and patriotism, Neymar has to look at the things which will help him conquer the world,'' Ronaldo told ESPN. "If he can play in Europe the way he does in Brazil, very soon he would be the best player in the world. "I cannot decide for him. But it is clear that if Neymar came to me for advice I would say the best thing is to go to Europe and choose the best team for him." Neymar has scored 72 goals in 150 appearances in all competitions for Santos.
Tags :
Science Technology Business Lifestyle

Prev article Our Goal Is Victory-Stevanovic 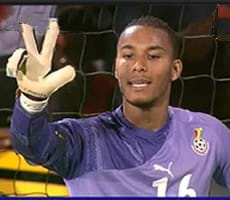 Next article Adam Kwarasey Battling Malaria Ahead Of Sudan Clash