Anti-Robert Mugabe rally is latest in recent unrest fuelled by economic crisis, cash shortages and high unemployment Riot police in Zimbabwe fired teargas and used water cannon to disperse anti-government protesters as a demonstration against the 92-year-old president, Robert Mugabe, turned violent. More than a hundred officers, backed by armoured trucks, moved to block a march on Friday – organised by a coalition of opposition groups in Harare, the capital – in the latest round of the most intense unrest in the former British colony for almost a decade. The protesters responded by hurling rocks, setting tyres ablaze and pulling down the sign for a street named after Mugabe, witnesses cited by news agencies said. Recent unrest has been fuelled by an economic crisis, cash shortages and persistent high unemployment. The government has been repeatedly forced to delay salary payments to teachers, doctors, soldiers and administrators. The country is also suffering a severe drought and is threatened by famine in some parts. “We are not going anywhere and demonstrating is the only solution left to force the dictator out of office,” said Tapfuma Make, an unemployed 24-year-old from Chitungwiza town, south of Harare, who joined the protest. Observers say the pressure on Mugabe, Africa’s oldest leader, and the ruling Zanu-PF party is immense. The most recent rally called for electoral reforms before 2018 when Mugabe, who has led Zimbabwe since independence from Britain in 1980, will seek reelection. Zanu-PF retained power after elections in 2013, which were tainted by allegations of vote-rigging. Much of the recent activism has bypassed traditional opposition politicians and parties. However, the march on Friday was led by the Movement for Democratic Change (MDC), led by Morgan Tsvangirai, and the Zimbabwe People First, formed this year by Joice Mujuru, a former vice-president. 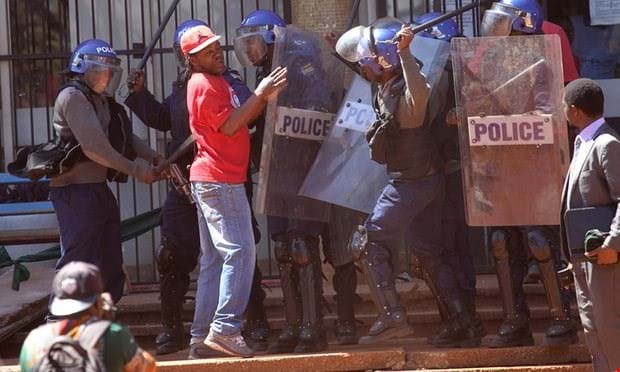 Police tried to discourage Friday’s march, saying the anticipated crowd of about 150,000 would disrupt business and traffic. Ignatious Chombo, the home affairs minister, warned on Thursday that the government would clamp down heavily on what it termed western-sponsored protests seeking regime change. “We view this as victory for democracy,” opposition spokesman Douglas Mwonzora said after a ruling by a high court judge allowed the march to go ahead. Opposition parties say Zimbabwe’s electoral commission is biased in favour of Zanu-PF and run by security agencies loyal to Mugabe, charges the commission denies. The protesters called for the 2018 elections to be supervised by international observers, including the UN. They are also calling for Mugabe to fire corrupt ministers. Earlier this week, Zimbabwe’s police used teargas and a water cannon to break up a march by MDC youth supporters. Last week, similar tactics were deployed when demonstrators took to the streets to voice their concerns about the introduction of new bank notes in Zimbabwe, planned for the autumn. Mugabe now appears weaker – physically and politically – than for many years. Veterans of Zimbabwe’s independence war made a significant break with him for the first time last month, calling him dictatorial, manipulative and egocentric. Mugabe has recently turned toward the Zanu-PF youth league for political support, with two rallies attended by tens of thousands of people. Analysts say an intensifying internal battle between factions seeking to take power when Mugabe dies has significantly weakened the ruling clique’s ability to respond to the economic crisis.