US Ambassador To Libya Killed 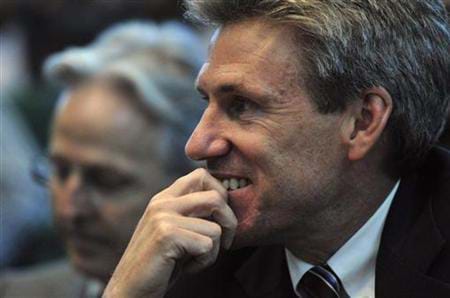 U.S. ambassador to Libya Christopher Stevens was killed by a "small and savage group" of Libyan militants who stormed the U.S. consulate in Benghazi, Secretary of State Hillary Clinton said today. Stevens, 52, died Tuesday night as 20 gun-wielding attackers descended on the U.S. consulate, firing automatic weapons and rocket-propelled grenades, Libya's Deputy Interior Minister Wanis al-Sharif told a news conference in Benghazi. Nearly a dozen Americans were inside the consulate at the time, guarded by Libyan security. For nearly 20 minutes the Libyan guards exchanged fire with the attackers, who hurled a firebomb inside. The militants burned down at least one building in the attack. It's not clear yet how Stevens died, but the Associated Press quoted a Libyan doctor who said the ambassador died of asphyxiation, apparently from smoke. The doctor, Ziad Abu Zeid, told the AP he worked for 90 minutes to revive Stevens. Foreign Service Information Management Officer Sean Smith died from smoke inhalation during the attack, officials said. Two more Americans, possibly guards who were trying to get Stevens out of the area, were also killed. U.S. officials are still making next of kin notifications. Clinton praised Stevens, who began working in Libya during the revolt against Muammar Gadhafi. "He risked his life to stop a tyrant and gave his life trying to build a better Libya," she said. The attack on the consulate in Benghazi came shortly after protesters in Cairo, Egypt, scaled the walls of the U.S. embassy and tore down the American flag in an angry demonstration against a movie about the life of the Prophet Muhammad, depicting the founder of Islam as a fraud and a womanizer. Clinton suggested that the movie played a role in the Benghazi attack as well, saying they were "working to determine motivations," but added, "Some have sought to justify this vicious behavior, along with the protest that took place at our embassy in Cairo yesterday, as a response to inflammatory material posted on Internet." The secretary of state said she asked herself "how could this happen in a country we helped liberate and in a city we helped to save from destruction." But she added that the people who attacked the consulate were a "small and savage group." President Obama said in a statement, "I strongly condemn the outrageous attack on our diplomatic facility in Benghazi, which took the lives of four Americans, including Ambassador Chris Stevens. Right now, the American people have the families of those we lost in our thoughts and prayers." "I have directed my administration to provide all necessary resources to support the security of our personnel in Libya, and to increase security at our diplomatic posts around the globe," the president continued. Speaking in the White House Rose Garden this morning, Obama said,"We will not waiver in our commitment to see that justice is done for this terrible act. And make no mistake, justice will be done." The U.S. Marine Corps is sending a quick response team of 40 into Libya, where the U.S. embassy is in the capital Tripoli. The group suspected of carrying out the consulate attack is called Ansar al Sharia, according to Libyan sources. But the group, which is close to al Qaeda in ideology and is based in east Libya, has denied responsibility for the attack. Libyan President Mohammed Yussef Magariaf promised to coordinate additional support to protect Americans in the country, condemned the assault on the embassy and pledged his government's full cooperation, Clinton said. Mohammed el-Megarif, Libya's interim president, apologized to the U.S. on Wednesday for the attack that killed Stevens and vowed to bring the culprits to justice. Stevens, who was a career member of the Senior Foreign Service and served two tours of duty in Libya, began his term of appointment on May 22, and he was in Libya during the uprising that deposed Qaddafi, serving as the American representative to the transitional national council. The U.S. is now evacuating all Americans from Benghazi who were working with the State Department, and the U.S. is bracing for more attacks in the Middle East. A senior U.S. official told ABC News the State Department is on alert throughout the region and fears there could be more attacks to come. In Cairo, dozens of protesters enraged by the movie scaled the embassy walls and took down the flag from a pole in the courtyard. After trying unsuccessfully to burn it, they ripped it apart and replaced it with a black flag bearing Arabic writing. The movie was made by Israeli producer Sam Bacile and has been promoted by controversial pastor Terry Jones, the Florida preacher whose Koran burning in March 2010 led to the deadly violence in Afghanistan. Jones said Tuesday in a statement that the movie was actually titled "Innocence of Muslims" and was intended not to attack Muslims but to show the "destructive ideology of Islam." "The movie further reveals in a satirical fashion the life of Muhammad," he said. Afghan President Hamid Karzai issued a statement today condemning the movie and called it an "insult" to Islam. "Desecration is not a part of the freedom of expression, but a criminal act that has now badly affected the righteous sentiments of 1.5 billion Muslims all over the globe," Karzai said. The Libya attack also created a political storm in the U.S. In a statement Tuesday about the film that was issued before the attacks on the diplomatic missions, the U.S. embassy in Cairo said it condemned "the continuing efforts by misguided individuals to hurt the religious feelings of Muslims."