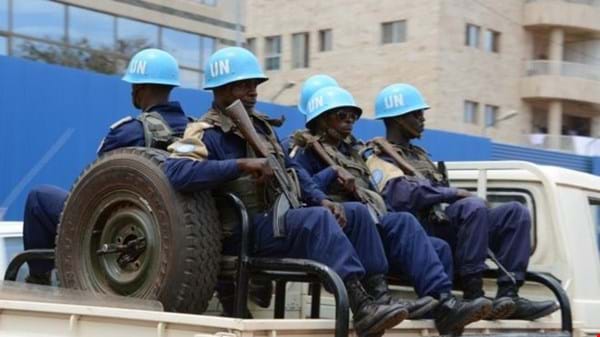 UN peacekeepers were sent to the CAR in 2014


At least 20 people have been killed in fighting between rival rebel groups in the Central African Republic, the UN mission in the country says.
UN peacekeepers said they had intervened to stop further violence in the northern town of Kaga Bandoro, near where the killings happened.
A spokesman for the presidency put the death toll at 26.
He said members of the mainly Muslim Seleka rebel group went from door to door and killed their victims.
The CAR has been prey to sectarian violence since March 2013, when Seleka rebels briefly seized power and deposed the Christian President Francois Bozize.
The Seleka group was itself then ousted, leading to a wave of violent reprisals against the Muslim population by the Christian anti-Balaka militia.
Thousands of people have been killed and hundreds of thousands displaced in the CAR since 2013. Some 11,000 UN peacekeepers are deployed in the country as part of the agency's so-called Minusca mission.