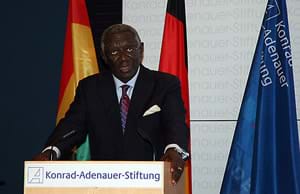 
Former Ghanaian President John A. Kufuor has called on Europe, Africa as a real economic partner and promote. “We do not want charity, we want investments that pay off for both sides,” he said in the Academy of the Konrad-Adenauer-Stiftung audience from around 200th He recommended the development of the continent, an African model of social market economy as the best economic system. Africa should no longer play the role of raw material suppliers for the other continents, said Kufuor. Instead, knowledge transfer are important, so that the raw materials can be processed locally. The continent since 2000 have to show sustained economic growth and open to the world. “There are now more changes of government through elections rather than by weapons,” said Kufuor. He was 2001-2009 president of an African model of democracy. In that time he has achieved a growth in Ghana’s gross domestic product of over seven percent annually. With a training program for all children up to 16, a national health program and the expansion of the rule of law while Kufuor has also followed the principles of the social market economy, he emphasized in his speech. “The spread of prosperity to the African market makes it interesting for Europe,” said Kufuor. At the same time he criticized the European Union for the slow implementation of the strategic partnership which it has promised the African Union in Lisbon in 2007. He also called for fair play in trade agreements between Europe and Africa: “Competition can only take place between equal competitors, and many African countries are still not on par with the Europeans.” In this context Kufuor spoke also about the role of China. The land fill in many places from the vacuum left behind by the European countries retreat or hesitation. “Ghana, Nigeria and Congo now need partners in order to develop with the help of their raw materials – China has come, where Western Europe?” At the same time the EU had to but have no fear of the Chinese engagement in Africa because it had the further development of relations in their own hands. Europe and Africa as an economic center line between the U.S. and China – as outlined Kufuor his ideas on world trade of the future. Hartwig Fischer MP, the Africa expert of the CDU / CSU parliamentary group, stressed in his speech, Kufuor also comment on the necessity of knowledge transfer. He referred both to programs that support the return of European-trained professionals to Africa, as well as the involvement of German companies in Africa which do there always on Capacity Building and the involvement of local workers. Issues such as liberalized trade agreements or the problems of corruption and lack of transparency should be discussed with openness and respect, “said Fischer. At the same time he encouraged German companies to engage even more strongly in Africa. The continent is diverse and large, it said there was both opportunities and risks, he said. opened up by men like John Kufuor, Africa is a promising future, he concluded. During his several-day visit to Germany at the invitation of the Konrad-Adenauer-Stiftung Kufuor was the presidential candidate of his party, NPP, Nana Akufo-Adda A., and accompanied by the party chairman Jacob Obetsebi-Lamptey. At midday, Kufuor had met with his companions to the former President of the Federal Republic, Horst Köhler. Both share a good working relationship already from the time when Keller was director of the International Monetary Fund. Then Kufuor signed the guidelines for prosperity, social justice and sustainable economies with which the Konrad-Adenauer-Stiftung summer of 2009 for global social market economy has been promoting.