Fishermen Engage With Police in Shoot out 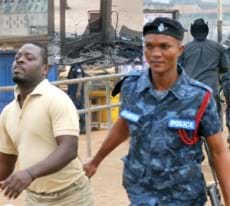 
In the circa of about 4,000 rioters from Tema Newtown, comprising mainly fishermen, yesterday clashed with the police in Tema over an attempt to use a fishing area to construct an oil refinery. The angry fishermen allegedly fired gunshots at the police and vandalized property at the site, burnt an office, a workshop, a Toyota Tacoma pick-up with registration number 3539-09 and a bulldozer hired by the company constructing the refinery. The incident led to the burning of the belongings of a private contractor and five offices of the Naval Base. The private contractor, Inova Holdings, had been contracted by the Tema Municipal Assembly (TMA) to clear illegal structures erected by encroachers, but the fishermen resisted the demolition exercise and attacked the contractor, Ben Kenneth Ntumi. The rioters say their action was a move to resist the construction of an oil refinery by Wilmor Edible Oil Refinery Project (WEORP) on a land that is said to be owned by the Ghana Ports and Harbours Authority (GPHA). The land, which is located around the Tema Canoe Beach, has been used by the fishermen and other residents of the area for fishing activities for well over fifteen years, and the rioters did not understand why the GPHA was leasing the parcel of land to the oil refinery company at their expense. The rioters, according to the police, had stormed the said piece of land on Friday morning to prevent from carrying out the duties, workers of a construction company engaged by the oil company to clear the debris from an earlier demolition exercise that was carried out by a taskforce from the GPHA, the Tema Metropolitan Assembly (TMA) and the Tema Development Corporation (TDC) last weekend, for work to commence. According to the Tema Regional Police Commander, Assistant Commissioner of Police (ACP) Augustine Gyenning, after the mob attacked the GPHA yard, some policemen were earlier placed at the site to ensure that the clearing of the debris was smoothly carried out. The commander said this might have triggered the whole incident as more of the residents later joined in the clash with the police, who ensured that they did not cause more havoc to the GPHA yard. Realizing the arrival of a police reinforcement team at the scene, the rioting fishermen moved backwards and set fire to a lot of stalls believed to be those of some of the traders around the demolished area, to prevent the police from getting closer to them as they intensified their stone-throwing. The arrival of another reinforcement team made the rioters retreat while the police fired teargas at them. A few of them were arrested, including one George Bruce, who was earlier on seen inciting his colleagues to pelt the police with stones and stoking the burning woods of the road-blocks, but they all denied participating in the riots. Later, when the police were able to control the situation, word got to the Regional Commander and other senior officers that the palace of the Tema Mantse, Nii Adjei Krakue II had also been attacked by a section of the rioters, compelling the commander to lead both the media and the police to the palace to ascertain the truth. At the palace, Richmond Adjei Adjetey Krakue, son of the chief narrated that he, together with some relations, was at home when the mob arrived demanding the whereabouts of the chief and vandalizing virtually everything on the compound including three vehicles, two of which were parked in the palace, with the third one outside. ACP Gyenning stated that even though some of the rioters were firing locally-manufactured guns at the police, his men did their best to bring the situation under control. He indicated that nine rioters were arrested at the scene, with about six others reported to have been arrested by the Tema Newtown Police, bringing the number of arrested persons to 15. Nesta Ghalley, Director General of GPHA, denied claims by Nii Adjetey Krakue that the GPHA and some chiefs of the area were involved in some illegal land acquisition and explained that though the GPHA did not see the publication in the dailies, it was reliably informed that a few months ago, the said chief held a press conference, during which he promised to lead the youth of the area to reclaim their land. Mr. Ghalley said it would be wrong for any person to suggest that the GPHA was involved in some illegal land acquisition as his outfit legally acquired that parcel of land and others to the GPHA way back in 1952.