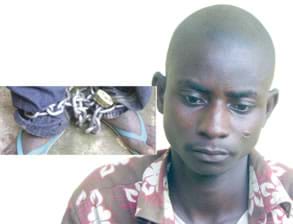 
In spite of the widespread condemnation of the practice of chaining so-called mad people in churches, some still continue to abuse the human rights of persons brought to them for spiritual assistance. The latest victim of this cruel practice is a 21-year-old RSA Marketing graduate of the Sunyani Polytechnic who resides at Manso Takorasi in the Amansie West District of the Ashanti Region. Kwabena Boadi was chained by Prophet Emmanuel Atta, the founder and leader of the Twelve Apostles Church, popularly known as ‘Nakaba’ at Asuofia in the Atwima Nwabiagya District of the Ashanti Region, with the excuse that he (Boadi) was getting mad. Prophet Emmanuel Atta did not only chain the two legs of Boadi but also locked it with two huge padlocks, ostensibly to curtail his movement because Boadi was allegedly getting mad. Though in chains, Boadi managed to sneak out of his room at the church premises and got to Fox Fm, a leading radio station in Kumasi, to reveal his ordeal. When Daily Guide went to the radio station, the victim, who was still in chains, was enjoying a meal provided by the station. In an interaction, Boadi, who spoke rationally, told the paper that his mother took him to the church for spiritual deliverance when she thought that he was getting mad due to the strange behavior he put up in the house recently. He said though he explained to his mother that the strange behavior was the making of the gods in their hometown, because they wanted him to come and serve as a fetish priest, his mother insisted that he was getting mad and therefore took him to the church. Boadi narrated that when he was taken to the church for the first time about three months ago, the 47-year-old prophet, without any assessment, decided to chain him but he escaped and got the chains removed at Breman, a suburb of Kumasi. A few weeks later, Boadi stated, his mother traced him and took him back to the church where, upon arrival, the pastor again chained him, but he once more escaped and got the chains removed. According to him, his mother again traced him to his hideout and took him back to the church on Wednesday where the pastor, for the third consecutive time, chained him; and this time around locked it with two big padlocks to ensure that he did not escape. With the belief that he was not getting mad but was being haunted by the gods who wanted him to serve them, Boadi said he decided to do everything possible to escape from the church for the third time. “So at about 3am, when the people guarding me including my mother were fast asleep, I decided to crawl on my knees till I got to the road side and begged a trotro driver to take me to town. When I got to town, I pleaded with a taxi driver to take me to Fox Fm,” Boadi disclosed. He said he knew for a fact that until he accepts to serve the gods as the chief fetish priest in their hometown, they would continue to haunt him and that the strange behavior he often demonstrated did not mean he was getting mad. “My brother, currently as I speak to you, I am awaiting my results so that I can further my education. So I am not getting mad as my mother is thinking,” Boadi stated, stressing that he did not find out the name of the pastor because he was not interested in knowing it. Prophet Atta stormed the premises of the radio station in the night around 10.00pm when Boadi was being interviewed on ‘Nya Asem Hwe’, a social magazine programme on the station and admitted to chaining the victim. According to the prophet, who claimed to have special powers from God to heal the sick, especially the mentally retarded, he decided to chain Boadi to prevent him from causing harm to others at the church. When it was pointed out to him that his action was illegal, Prophet Atta then apologized, after which he immediately unlocked the padlocks and removed the shackles from Boadi’s legs. He however pleaded with the radio station to allow him to take Boadi back to the church premises so that he could hand him over to his parents, promising not to chain the man or any other patient in his care.