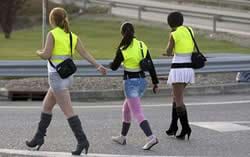 It's the law: Pedestrians on major highways or hard shoulders must wear fluorescent jackets


Street prostitutes have been ordered by police to wear fluorescent jackets to prevent road accidents outside a Spanish town. Officers have been fining the sex workers £35 (40 euros) for failing to wear the brightly coloured clothing where they work, on the LL-11 highway near the town of Els Alamus, in Catalonia in north-east Spain. They started wearing the jackets last week following a crackdown by the regional Catalan police force, the Mossos d’Esquadra. Officers fined the women under a road traffic law which states pedestrians on major highways or hard shoulders must wear fluorescent jackets. The law was introduced in 2004 to prevent the deaths of motorists whose cars have broken down on major roads. The women have responded to the fines by buying the sleeveless yellow jackets and wearing them over their work outfits, often consisting of short skirts or shorts and skimpy tops. A spokesman for the force said officers were not singling the women out, and were fining them under traffic laws applicable to all pedestrians. Mayor Josep Maria Bea has been trying to drive the women out of the area. The town hall recently passed a bylaw banning prostitutes from offering sex for sale in public areas. Locals have complained about the women and say the streets are littered with condoms they leave behind. Street prostitutes are a common sight on Spanish highways. More than 300,000 women work as prostitutes in the country, where prostitution is not illegal. Around 95 per cent are immigrants, mostly from South America and north Africa. A recent survey found one in four Spanish men admitted to having paid for sex. The industry generates an estimated £16 billion a year to the Spanish economy.