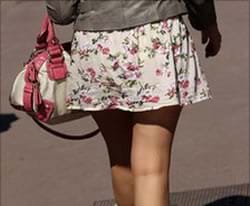 Does this min qualify to be worn?


The Italian mayor behind a campaign to ban tiny miniskirts from his seaside town will find out tonight whether his plan has won the backing of the council. Luigi Bobbio, the mayor of Castellammare di Stabia, near Naples, is adamant that his proposal does not constitute a full ban on miniskirts. He points out that miniskirts will be allowed – as long as they cover women's underwear. The proposal is one of many designed to help "restore urban decorum and facilitate better civil coexistence". Others include a ban on swearing and a prohibition on playing football in public parks. Bobbio claims the miniskirt decree is intended only to put an end to excessive flesh being displayed away from local beaches. However, it does mean the police will be checking women's hemlines to see if they can spot knickers, and imposing fines of up to €500 (£445). Although the town council is due to vote on the measures at about 6pm UK time, the mayor has a good majority and the moves look set to pass. Women representing the local opposition, who have said the measures will make Castellammare di Stabia like Iran, will stage a protest sit-in. The seaside town is not the first place to take a dim view of high hems. In September 2008, Uganda's ethics and integrity minister called for a ban on miniskirts, claiming they were dangerous as they could prise drivers' eyes from the road. James Nsaba Buturo told journalists: "What's wrong with a miniskirt? You can cause an accident because some of our people are weak mentally." Six years ago, women in the Kenyan city of Mombasa were given leaflets instructing them to dress modestly and shun miniskirts. The leaflets prompted the government to deny rumours that it was pressing for a ban. Shortlived bans have also been introduced in parts of Russia and Chile. The prohibition at a teachers' college in the Siberian city of Kemerovo was challenged by lawyers who said the ban was "an infringement of equality and human rights … guaranteed by the Russian constitution". The Chilean women's minister, Carolina Schmidt, was quick to step in after a regional governor banned public employees from wearing miniskirts and strapless tops. "It's absolute nonsense that someone should tell other people how to dress," said Schmidt. Bans have also been imposed in the UK. In July this year, Southampton city council told its female employees that they should not wear miniskirts and should ensure that their attire was "appropriate" for the work they did. And girls at two schools in Yorkshire and Suffolk have been banned from wearing skirts altogether and told to wear trousers.