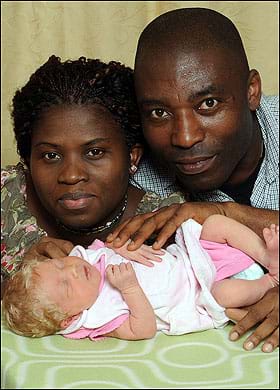 
THE stunned black dad of a newborn, WHITE, baby girl declared yesterday — "I'm sure she's my kid ... I just don't know why she's BLONDE." British Nmachi Ihegboro has amazed genetics experts who say the little girl is NOT an albino. Dad Ben, 44, a customer services adviser, admitted: "We both just sat there after the birth staring at her." Mum Angela, 35, of Woolwich, South London, beamed as she said: "She's beautiful - a miracle baby." Ben told yesterday how he was so shocked when Nmachi was born, he even joked: "Is she MINE?" He added: "Actually, the first thing I did was look at her and say, 'What the flip?'" But as the baby's older brother and sister - both black - crowded round the "little miracle" at their home in South London, Ben declared: "Of course she's mine." Blue-eyed blonde Nmachi, whose name means "Beauty of God" in the Nigerian couple's homeland, has baffled genetics experts because neither Ben nor wife Angela have ANY mixed-race family history. Pale genes skipping generations before cropping up again could have explained the baby's appearance. Ben also stressed: "My wife is true to me. Even if she hadn't been, the baby still wouldn't look like that. "We both just sat there after the birth staring at her for ages - not saying anything." Doctors at Queen Mary's Hospital in Sidcup - where Angela, from nearby Woolwich, gave birth - have told the parents Nmachi is definitely no albino. Ben, who came to Britain with his wife five years ago and works for South Eastern Trains, said: "She doesn't look like an albino child anyway - not like the ones I've seen back in Nigeria or in books. She just looks like a healthy white baby." He went on: "My mum is a black Nigerian although she has a bit fairer skin than mine. "But we don't know of any white ancestry. We wondered if it was a genetic twist. "But even then, what is with the long curly blonde hair?" Professor Bryan Sykes, head of Human Genetics at Oxford University and Britain's leading expert, yesterday called the birth "extraordinary". He said: "In mixed race humans, the lighter variant of skin tone may come out in a child - and this can sometimes be startlingly different to the skin of the parents. "This might be the case where there is a lot of genetic mixing, as in Afro-Caribbean populations. But in Nigeria there is little mixing." Prof Sykes said BOTH parents would have needed "some form of white ancestry" for a pale version of their genes to be passed on. But he added: "The hair is extremely unusual. Even many blonde children don't have blonde hair like this at birth." The expert said some unknown mutation was the most likely explanation. He admitted: "The rules of genetics are complex and we still don't understand what happens in many cases." The amazing birth comes five years after Kylie Hodgson became mum to twin daughters - one white and the other black - in Nottingham. Kylie, now 23, and her partner Remi Horder, now 21, are both mixed race. Even so the odds were estimated at a million to one. The Sun told in 2002 how a white couple had Asian twins after a sperm mix-up by a fertility clinic. Yesterday three-day-old Nmachi's churchgoing mum Angela admitted that she was "speechless" at first seeing her baby girl, who was delivered in a caesarean op. She said: "I thought, 'What is this little doll?' "She's beautiful and I love her. Her colour doesn't matter. She's a miracle baby. "But still, what on earth happened here?" Her husband told how their son Chisom, four, was even more confused than them by his new sister. Ben said: "Our other daughter Dumebi is only two so she's too young to understand. "But our boy keeps coming to look at his sister and then sits down looking puzzled. "We're a black family. Suddenly he has a white sister." Ben continued: "Of course, we are baffled too and want to know what's happened. But we understand life is very strange. "All that matters is that she's healthy and that we love her.She's a proud British Nigerian." Queen Mary's Hospital said: "Congratulations to Angela and her family on the birth of their daughter." PROF BRYAN SYKES Oxford University says this sounds a very unusual case. Quite extraordinary. All skin and eye colour are controlled by the pigment melanin. And there are about a dozen genes that control the amount or type of melanin. Even if there had been convergence of a pale version of the parents’ genes, there would have to be some form of white ancestry on both sides for the baby to look this way. As albinoism has been ruled out, it is more likely that there has been some other mutation that’s happened to produce this colouring. Without further tests, that is, in my opinion, the most rational explanation.