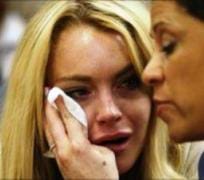 
US actress Lindsay Lohan has been taken into custody in Los Angeles to serve a jail sentence for probation violation. The 24-year-old was handcuffed and sent to a women's prison south of the city after appearing before a court. She is expected to serve less than the 90-day sentence imposed earlier this month because of jail overcrowding, and is likely to spend it in isolation. Lohan, who was jailed after failing to attend alcohol education classes, will enter rehabilitation after her release. Small cell Her probation was imposed in 2007 in relation to drunk driving and drug possession charges. In ordering Lohan's remand, Judge Marsha Revel ordered TV cameras and photographers not to take pictures of the actress as she was taken away from the Beverly Hills courtroom. "I don't know exactly how long the jail will keep her. I can only impose the sentence," said the judge. Officials have said that Lohan's sentence could be just three weeks for good behaviour and also due to the strain on prison accommodation. She will spend her sentence in a small cell in the Century Regional Detention Facility to the south of Los Angeles. The all-women prison houses some 2,200 inmates. Mobile phones and computers are prohibited at the jail, while Lohan will have to surrender all her jewellery and wear a standard orange jumpsuit. Lohan spent just 84 minutes of a sentence there two years ago for her 2007 drink-driving and drug possession offences.