Kumasi gears up for Asantehemaa's funeral 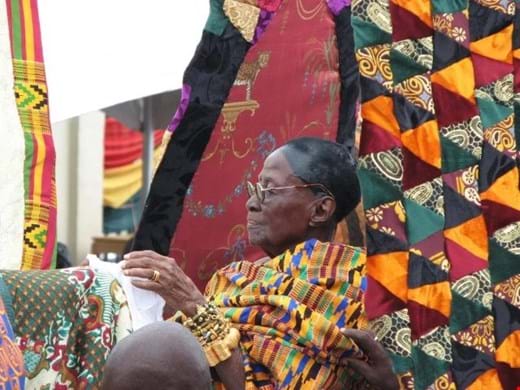 Preparations are underway for the final funeral and burial rites of the late queen mother of Asanteman, Nana Afia Serwaa Kobi Ampem II, who is to be buried next week.

According to Manhyia Palace, the late mother of Otumfuo Osei Tutu II who passed in November 2016 at age 111 would take place from January 16 -19.

She saw the reign of the late Otumfuo Opoku Ware II as Asantehene who reigned from 1970 to 1999. Nana Afia Kobi who reigned for 39 years.

Visitors to the Ashanti regional town of Kumasi are greeted with red and black ribbons at all majors intersections, Joy News' Erastus Asare Donkor reports.

At the Manhyia Palace, there are more red and black decorations everywhere which signify mourning.

The ancestral burial grounds of Bemu at Breman and the Bantama Mausoleum where a service would be held for her, facilities have been upgraded.

There has been a controversy brewing following a warning by the Asanteman Council that residents should stay indoors on Thursday, Jan 19 from 8 p.m to Friday, January 20, 4 a.m to enable the traditional authorities to perform the necessary rites in giving the late queen a befitting burial on her journey to the 'village.'

The reporter explained that it is a sacred tradition that while the remains of the late queen mother is on the last 'journey to the village', the entourage is not supposed to meet any other person on the way.

The traditional authorities are against people taking advantage of the customary rites have debunked rumors it will offer human sacrifices to its ancestors as part of the funeral rites.

Asantehene’s Mawerehene, Baffour Hyiaman Brentuo VI said the ban is not to encourage human sacrifice which was abolished some 200 years ago.

Shops are also not to be opened on Thursday, January 19 in reverence to the late Nana Afia Serwaa Kobi Apem.