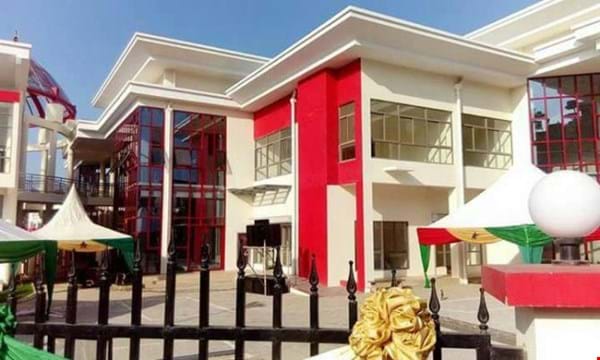 Apart from having several shops, it also has banks, a hospital and a school.

It also has an office block, a parking lot, eatery, a fire department, offices, a drainage system and walkways, to ensure the free movement of traders and customers.

Speaking at the inauguration ceremony, President John Mahama said the project will among other thing boost the economy in the area.

The President during the commissioning stated that, the initial traders at the market will have shops allocated to them, and also promised that there will be no unfairness in the allocation of the shops.

“A list of the women and other traders who were trading in the market before the reconstruction are going to be served first. Afterwards, if there are more stores, others will be attended to,” he added.

On his part, the Paramount Chief of the Oguaa Traditional Area, Osabarima Kwesi Atta II, thanked government for the project.

“It is a good thing that has happened in Oguaa. About four years ago this place was disorganized. The late President John Atta Mills saw the importance to develop the market. We thank you [President Mahama] and your team for the good work you have done,” Osabarima Atta II added.

Work on the project began in December 2014, after a court in Cape Coast ordered the demolition of the old project to make way for the Cape Coast stadium.

Some traders had prayed the court to halt the demolition of the old market until decent structures had been provided for their relocation.