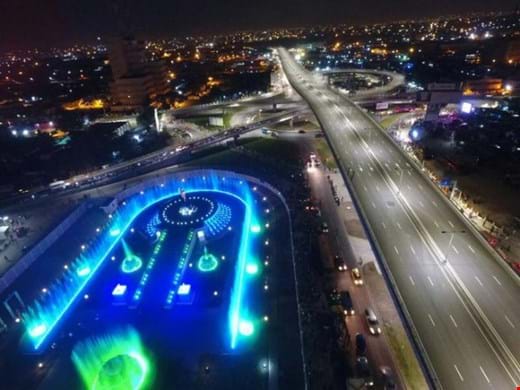 A whopping $100 million was lost to the economy per annum as a result of a strangulating traffic situation at what used to be the Circle roundabout in Accra.
That was the revelation from president John Mahama on the night he commissioned an outstanding interchange, a beautiful piece of road infrastructure to replace the Circle Round about.
"It is the longest, highest fly over in West Africa," the president declared to an ecstatic crowd of government officials, party supporters, political leaders and the general public.
The Circle round about for years connected Accra's major roads to Kaneshie, Achimota, Accra Central, Osu and its adjoining suburbs.
However, a journey through Circle was for years an unavoidable nuisance with passengers spending several hours in traffic for journeys they could make in minutes, if not in seconds.

Even though the project was conceived by his predecessor, the late John Mills, the president, John Mahama, on October 2013 began the actual construction work at the Circle round about.
Three years down the line and with hard work by the contractors  the president commissioned the flyover amidst pomp and celebration on November 14, 2016.
Fitting Nkrumah memorial
The interchange has a magnificent water park with a dancing fountain, the idea of which was taken from Dubai which would now become a tourist attraction for many, the president said.

The site also has an imposing statue of Ghana's first president Dr Kwame Nkrumah which is "a fitting memorial in honour of the greatest Pan Africanist."
"Nkrumah's statue will remind people about the man who led the way to our nation's birth," he said.
The project is "not just a modern interchange but a convenient place for tourism. The health and happiness of citizens are also important," he stressed adding, that the citizenry can always take a stroll at the water park with the beautiful lighting architecture.
President John Mahama said the new interchange will "facilitate easy movement of goods and services" on one of the most busy roads in Accra.
He said a lot of jobs were created as a result of the construction of the interchange and a lot more will be created now that the project is over because time which is an important resource has been made available to people.

According to him, at least "200,000 vehicles will use the road in a day" with the possibility that traffic will be reduced from two hours to five minutes, a change that will "save millions of cedis in travel time and stimulate business," he added.
Police Station
Hated not only for its traffic congestion, Circle is also notorious for its petty criminal activities. The president said the new interchange now has a police station that will check criminal activities around the area.
There is also a fire service station at hand to respond to fire emergencies, as well as an ambulance station, he added.

The president said the Circle interchange is one of many other interchanges the government will build. He cited the Kasoa interchange which he said has reached an advanced stage and will be opened before the end of December 2016.

Ghana is rising and greater times are ahead of us, he promised. We will continue to work hard and change lives of Ghanaians.