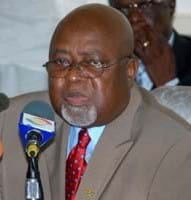 Lieutenant General Joseph Henry Smith, Minister of Defence yesterday said Ghana would benefit from a partnership between the Ghana Armed Forces (GAF) and Knight AS of Czech Republic to establish a Defence Industries Holding Company Limited (DIHOC). He said GAF had the requisite human resource to effectively manage DIHOC for the country, and would be self-sufficient and not import military accoutrement. Lt-Gen. Smith said these at a press conference in Accra to clarify issues in the media on the intention of GAF to engage in business activities, especially in relation to the establishment of DIHOC to revive the defunct Kumasi Shoe Factory. On July 29 this year, the Defence Minister formally launched a programme dubbed: “Civil–Military Collaboration for Socio-Economic Development in Ghana (CIMCSED)” in Kumasi. Under CIMCSED, GAF would develop a policy framework to encourage the establishment of factories or manufacturing plants to produce items of strategic importance to the Armed Forces in particular and the nation as a whole. In addition, GAF in partnership with Knight AS bid for the divestiture of Kumasi Shoe Factory in 2009 and won. The new venture on the basis of 60-40 per cent with GAF having minority shares would prioritise in footwear, garments, computer assembling, solar and renewable energy, pharmaceutical and engineering projects. Lt-Gen. Smith noted that many countries both developed and developing had embraced such initiatives as their contribution towards industrialisation. He said the venture would not only provide employment to GAF personnel but most of the citizenry. Brigadier General Nii Armah Tagoe, Head of Defence Industries Department (DID) of GAF, Headquarters said the idea to establish DIHOC had been on the drawing board for some time now and had taken GAF two years of research, discussions and consultations with experts. He explained that the GAF had been reactionary to issues therefore it was opportune for the institution to become more proactive in some aspects of national socio-economic development and remained focused in its desire to contribute towards national development. Brigadier General Tagoe said there was the need for new initiative and direction by GAF to meet its own requirements to shoring up State funding and overcome challenges in the delivery of badly needed support to the military. He noted that the military was associated with high level of discipline, positive attitude to work, upholding best practices in professionalism in work ethics and culture. “We believe that given the chance, GAF can impart to the citizenry, especially those that interact with the noble institution its high level of discipline,” he added. Brig. General Tagoe explained that DIHOC would separate the socio-economic activities of GAF from its core business of national security. He said DID was instituted to provide the framework for GAF and ensure DIHOC primarily served needs of the military and produce enough to meet the needs of local market. Brig. General Tagoe cited the United States, United Kingdom, Norway, India, China and Turkey as countries which through their armed forces had undertaken research and built factories to produce identifiable items of strategic interest in their countries. He said the defence industries of these countries manufactured virtually all the logistics needed for their armed forces and exported the excess.