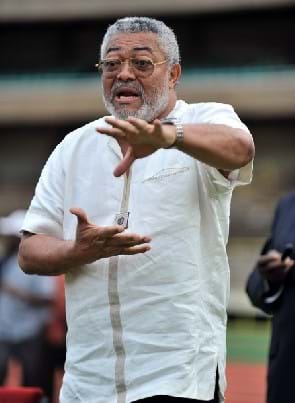 AU Face of Humanitarian Efforts for the Horn of Africa


The AU Special Envoy to Somalia, Former President Jerry John Rawlings has been appointed the AU Face of Humanitarian Efforts for the Horn of Africa. The Horn of Africa denotes the region containing the countries of Eritrea, Djibouti, Ethiopia Kenya and Somalia. The appointment came as the United Nations warned that the crisis was intensifying, with more than 12 million people in Somalia, Kenya, Ethiopia and Djibouti urgently needing help. Tens of thousands have already died and hundreds of thousands are at risk of starvation in the Horn of Africa. His appointment was revealed on the Big Bite on Xfm 95.1 by his close ally, Herbert Mensah. Herbert Mensah, who has been on a number of trips with Former President Rawlings in his work as the AU envoy said President Rawlings’ new appointment “is testimony of his negotiation skills and the kind of work he is doing”. “Now he has been given a bigger and wider appointment; he is the face of humanitarian issues in the horn of Africa…It’s a different situation in Somalia but certainly the cultural sensitivities and what is required… is actually very complex and take quite some leadership. And I think that is why the AU, even though they had some offices at the highest level responsible for Somalia, they believed they needed somebody who was a little bit more unorthodox, somebody who could come to the ground and deal with people at different levels,” he said. Former President John Rawlings, he said, has been making massive appeals to all the different presidents in Africa to pledge monies to help the course of the Horn of Africa, since taking his extended mandate. Aside that, he said Mr Rawlings has demonstrated by his work that Somalia is not impenetrable. “We have seen even here in Ghana that the government gave a token amount to Haiti; one will expect that obviously, this being Africa and a different magnitude, they will also be called on. So we are seeing the different regional heads; later this month, they will have a day where countries will pledge monies for that,” he said, adding, “even when we were in Mogadishu his Excellency was walking up to 200 meters from the war front, he wanted to demonstrate that if you really want to help the people of Somalia, we must not just brand it as a place that is impenetrable”. The AU special envoy just returned from the Equatorial Guinea where he held meetings with the Chairman of the AU, Theodoro Obiang Nguema Mbasogo, to ask all African leaders to pledge towards the pledging summit. Herbert Mensah, who was full of praise for the African countries that have committed troops to the war-torn area, however, called for “a global standard”, decrying the dilapidated situations the troops; including soldiers from Ghana, operate under. He said, “my heart went out when we landed to see a group of Ghanaian ladies, waving the Ghanaian flags; they came to hug his Excellency and insisted they take pictures. I did not even know there were Ghanaians there; but the conditions are very difficult out there”. Asked if there were any lessons the government of Ghana can learn from the Somalia drought, Herbert Mensah said, “Yes, we have programs to increase food production, but we do have food security programs, whether we like it or not. And we have to address those situations. Things can change so quickly in any country and Ghana is not an exception to that”.