Food Prize Goes to Ex-Leaders of Ghana and Brazil 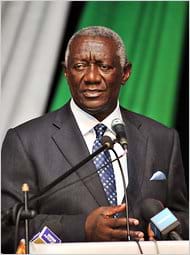 
Surgeons save lives and firefighters save lives, but so do people who work toward greater food security. They don’t do anything as climactic as extracting tumors or plucking the unconscious from smoldering buildings, but they do tackle global hunger, a problem that affects one-seventh of the world’s population. Each year the World Food Prize recognizes the work of individuals who have advanced human development by improving the quality, quantity or availability of food in the world. The award was founded in 1986 by Norman Borlaug, a Nobel Peace Prize winner who transformed agriculture a half-century ago through his development of higher-yielding and heartier wheat varieties. In the past, the prize has chiefly been awarded to researchers who, like Dr. Borlaug, made scientific breakthroughs in plant and soil science, animal health or insect physiology. This year, however, the honor went for the first time to two former heads of government: John Kufuor, the former president of Ghana, and Luiz Inácio Lula da Silva, the former president of Brazil. Programs embraced by both leaders have helped ensure that their countries will exceed the development goal of cutting hunger in half by 2015. During Mr. Kufuor’s presidency, from 2001 to 2009, Ghana became the first country in sub-Saharan Africa to halve the percentage of its population living on less than a dollar day and suffering from malnutrition. His National School Feeding Program increased school attendance and reduced hunger by providing one meal a day at school for children 4 to 14 years old. The gross domestic product also quadrupled during that period. By the end of his second term in 2010, President da Silva’s initiatives under his Zero Hunger strategy had more than halved the number of Brazilians suffering from malnutrition, with 93 percent of children and 82 percent of adults eventually gaining access to three meals a day. “Dr. Borlaug often told me that the Green Revolution would never have happened without the decisive leadership of the president of Pakistan and the prime minister of India, who made the promise of scientific advancements a reality on the ground in the 1960s,” said Kenneth M. Quinn, a former United States ambassador to Cambodia and the president of the World Food Prize program. “We thought it high time to recognize and draw attention to heads of government who make change happen.” JOANNA M. FOSTER