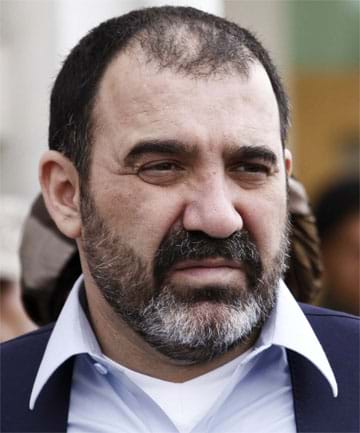 
Afghan President Hamid Karzai wept and kissed his dead brother's face as thousands of mourners gathered for the burial of Ahmad Wali Karzai, whose assassination yesterday has left a power vacuum in Afghanistan's volatile south. Two explosions were heard in Kandahar city by a Reuters witness soon after the burial, adding to tensions. It was not immediately clear what caused the blasts or whether they were any casualties. Ahmad Wali Karzai, a younger half brother of the president and one of the most powerful and controversial men in southern Afghanistan, was killed by a trusted family security guard at his home in the city. President Karzai, who flew to Kandahar hours after his brother was shot, led a procession of thousands of mourners under a tight security blanket from the center of Kandahar city to the family's ancestral village of Karz, some 20 km away. He was accompanied by his family and some of Afghanistan's most influential leaders, including at least one possible successor to Ahmad Wali Karzai's unofficial crown, Gul Agha Sherzai, currently the governor of eastern Nangarhar province. The president knelt by the side of his brother's grave clutching his hand, weeping as the crowds looked on. Concerned mourners then pulled the president away, warning him that television cameras were recording his every move. "I came here to mourn the death of Ahmad Wali Karzai. He was our only hope for everything in Kandahar," cried one mourner, Khan Agha, as attack helicopters circled overhead. Ahmad Wali Karzai was shot by Sardar Mohammad, a senior member of the Karzai family's security team in Kandahar who had known his victim for a decade. Mohammad was shot dead by bodyguards moments after he opened fire. The Taliban claimed responsibility for one of the most high-profile assassinations of the last decade. They have in the past taken responsibility for attacks that security services have questioned their role in. Ahmad Wali Karzai's power came not from his position as head of the provincial council - a largely consultative role which normally carries limited influence - but from his tribal and family connections and the fortune he accumulated. He has been accused of amassing a fortune from the drugs trade, intimidating rivals and having links to the CIA - charges he strongly denied and his brother said were not proven. Ad Feedback His death has left a gaping hole across the south where power is largely determined along tribal and ancestral lines. While outranked by the province's governor, it was Ahmad Wali Karzai who held the real power and who was considered Karzai senior's envoy in the south. "AWK (Ahmad Wali Karzai) said he was the most powerful official in Kandahar and could deliver whatever is needed," read one US government cable on a meeting between Karzai and U.S. officials, recently released by WikiLeaks. Speculation is now mounting about who will take the place of Ahmad Wali Karzai, who some analysts dubbed "irreplaceable." On the list is Gul Agha Sherzai, an ally of Karzai, who served as Kandahar's governor until 2004 when he was removed by the president and sent to Nangarhar. He flew down for the burial. "This is one of the saddest days for Afghan people, I came here to give my deepest condolences. He was killed in a cowardly manner, the plotters will be severely punished," Sherzai said.