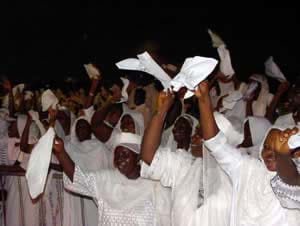 Hajia Sadika Bonsu Yeboah, President of the Ladies Association of the Ahmadiyya Muslims Mission, on Sunday attributed the rise of homosexuality in society to the negative influences of human rights. According to her, homosexuality had been on earth for a long time, but had become more popular in recent times due to negative effects of human rights. He said for this reason, society must abhor it and fight against other negative influences of human rights. Hajia Yeboah was speaking at a marriage seminar dubbed: "The Islamic Marriage Systems: The Role of an Ahmadi" organised by the Greater Accra Ladies Association of Ahmadiyya Muslims Mission. The seminar aimed at enlightening the Jamaat on the need to marry from the mission and the benefits to be derived. It also aimed at educating the Jamaat on how to select right partners. Hajia Yeboah said the world had now seen a new era, where marriage was no longer considered necessary or even significant, adding that, Allah had laid down rules and regulations for marriage and considered marriage an important and essential part of a Muslim's life. She said man had strayed far from the teaching of God and instituted their marriage in the name of human rights. “They doubt that Allah Almighty arraigned marriages for men and women to find comfort in one another and also for progeny”, she said. Dr. Maulvi Wahab Bin Adam, Ameer and Missionary-In-Charge of Ahmadiyya Muslims defined marriage as a noble institution that curbed promiscuity and sustained society, adding that it should be treated as sacred. He said flirtation had become rampant among the current generation due to courtship. “This trend must stop if we are to restore discipline and morality in the society,” he said. He called on members of the Mission to work hard to facilitate marriages to make them worthwhile.