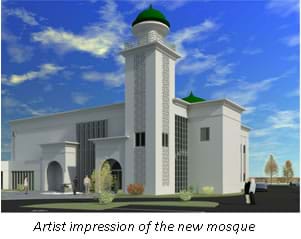 Ahmadiyya Muslim Community of New Zealand will lay the foundation stone of a new magnificent landmark in Manukau, Auckland on Friday 06th July 2012 after their Friday prayers. This will be the largest purpose built Mosque in New Zealand which will accommodate over 600 worshipers. Hadhrat Mirza Masroor Ahmad, the Supreme Head of Worldwide Ahmadiyya Muslim Community, approved the project which is being funded totally by the Ahmadiyya Community of New Zealand. Mr. Mohammed Iqbal VRD, JP, National President of the Ahmadiyya Muslim Community of New Zealand said: “It will be a historic occasion for the community as it reflects on the blessings of God on the progress our community has made since its inception in New Zealand some 25 years ago. This has only been possible through the prayers and direction of our Supreme Leader Hadhrat Mirza Masroor Ahmad (atba), Khalifatul Masih V. It is humbling to note that our community members have shown utmost dedication and commitment to the call of supporting this first historic mosque. This mosque will be a symbol of peace, prosperity and integration for all people from various walks of life in New Zealand”.