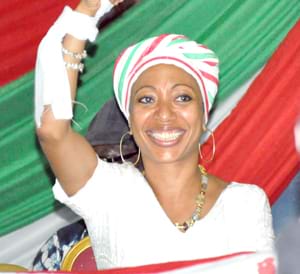 
Samia Yaba Nkrumah has urged journalists in Ghana to return to the principles of respect and selflessness in their practice while advising Ghana’s leaders to be sincere and honest in their endevours. She believes that “some journalists talk too much, document too little and act too late” in covering the essential issues that affect the common man. And she criticized a “lack of sanity” in contemporary journalism that she said is “a result of a lack of vision and clarity for our nation today, which is breeding disrespect towards one another.” Ms. Nkrumah, the Chairperson of the Convention People’s Party, and MP for the Jomoro West constituency, said this at a seminar for graduate students organized by the School of Communication Studies (SCS) at the University of Ghana. A former journalist herself, Samia won a European Union award-winner for her work as a reporter in Egypt. She said transparency and objectivity is the only way journalists can help address widespread corruption in politics and business. “We need to be part of the social transformation” she said, adding that “it is the responsibility of our journalists to tell the truth about Ghana to Ghanaians and the world.” Journalists, she said, need to promote national cohesion and total respect for all citizens, by seeking areas of potential consensus on key national issues. The media, she recommended, should identify the "elements around which we can agree.” She said, “journalists have the power to change the country if only we are very clear on how we want to see Ghana in the near future.” Citing an example of the state of roads and lack of classrooms in the country, Samia Nkrumah believes that if monies meant for road construction and school buildings are used for their exact purposes, the country will be promoting the needs of its citizens. “We need to create fair and equal opportunities for every Ghanaian to reach their full potential. If I deserve quality education, then so do you. This should be the basis of our politics,” she said. She proposed that with respect, honesty and commitment to the nation and its local entrepreneurs, Ghana could build local industries like her father, Kwame Nkrumah’s government did. She cited the Black Star, which used to ship local goods across Europe, the Americas and other parts of Africa; the Nsawam Cannery, which canned fruits and vegetables for both exports and internal use; the Juapong textile factory which produced gray baft, the raw materials for textile making; the Kumasi tannery, which produced leather for shoes, bags, belts and other leather products; and the Bolga meat factory, which produced the local ‘Volta Corned Beef’ as a few of such factories. According to her, it is only when this is done that Ghana can end the ‘dependency syndrome’ from foreign power. “We can then be committed to managing our monies better, producing local goods, promoting indigenous industrialists and improving local capabilities.” Samia Nkrumah, quoted Dr. Kwame Nkrumah, her father, who said “we must practice what we believe,” stressing, Nkrumah believes that “the only way to manage our own affairs is to imbibe our culture, have an inner vision and the political will to do so.” Supporting the statement, Sussane Adu Amankwah, the Vice President of the CPP, who accompanied Nkrumah proposed that Western democracy should not be practiced outside our culture. She said traditionally, Ghanaians used to disagree in mutually respectful ways and that “unlike the democracy that existed in the chief’s palace, which promoted temperate disagreements, we just took the western democracy and are running with it.” She gave examples of other countries that are thriving on the interiors of their indigenous culture. “Those countries which have developed such as China, Japan, Singapore and the rest, did so within their own culture. We are Africans and must build our nation within our culture. We need to be self-determinate. This is the way to go”. Commenting on Prime Minister David Cameron’s stand on withholding aid from African countries who do not respect some human rights, Samia Nkrumah said “this is a wakeup call! We must start doing more at home for ourselves in order to reduce the amount of dependency on foreign aid.” She also called on leaders in the country to engage in projects that will benefit the community since the “majority of the people who vote us into power do not enjoy these basic necessities.” Mrs. Margaret Amoakohene, acting director of SCS, thanked Samia and her team for coming, saying that “it is important for our students to be inspired in order to make a difference in their country.” By Baaba Cofie The writer is a student at the School of Communications Studies, University of Ghana, Legon.