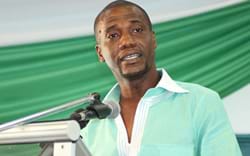 A Co-founder of the UMC, Mr Jacon Osei Yeboah