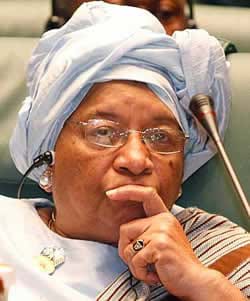 Liberian President Ellen Johnson-Sirleaf has asked all but one of her cabinet ministers to stand down with immediate effect. The president told ministers she wanted to restructure the cabinet and start with a clean slate, her office said. Deputies are to lead ministries until replacements have been appointed and some ministers might be asked to return to the cabinet, the statement added. The minister for presidential affairs is to stay on for the time being. President Johnson-Sirleaf told ministers she wanted the cabinet to resign because "this administration is entering into a critical stretch and this would afford her the opportunity to start with a fresh slate going forward", her office said in a statement. Ms Johnson-Sirleaf said she wanted to assess ministers' performance. The reshuffle could also be used "as an opportunity for reflection" by the ministers now on leave, she suggested. The president has been in power since 2006 and is expected to stand again in elections scheduled for 2011. Ms Johnson-Sirleaf has set out to tackle corruption, and last month the government said that it was investigating the role of former and current public officials in a suspected corruption scandal involving a proposed carbon deal.