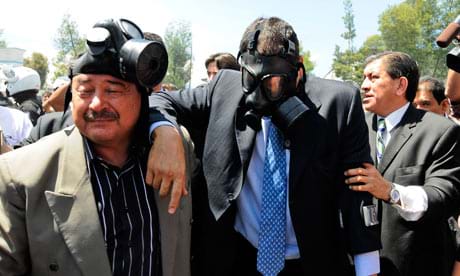 Rafael Correa is helped as he runs away from tear gas. Photograph: Dolores Ochoa/AP


Ecuador teetered on the brink of chaos early today as rebellious police officers protesting against austerity measures blocked airports and roads, occupied the national assembly and besieged the president in a hospital after physically assaulting him. The government called the revolt a coup and declared a one-week state of emergency which put the military in charge of public order and suspended civil liberties. Peru shut its border with Ecuador. "This is a coup attempt," President Rafael Correa told state-run Ecuador TV from the hospital where outside civilian supporters confronted mutinous police amid scenes of near anarchy. "They're trying to get into my room, maybe to attack me. I don't know," said the president. "But, forget it. I won't relent. If something happens to me, remember my infinite love for my country, and to my family I say that I will love them anywhere I end up." From an upstairs window Correa told supporters gathered below he would not buckle to the rebels. "If they want me, here I am," he said, and tore his tie loose. The drama was sparked by a vote in congress on Wednesday which cut the benefits of police and members of the armed forces. The response was swift and underlined Ecuador's reputation as South America's most volatile country. On Thursday morning about 150 men in uniform, thought to be air force members, overran the landing strip at Quito's main airport, forcing flights to be cancelled. Hundreds of soldiers and police took over barracks in Quito, Guayaquil and other cities. They also set up roadblocks out of burning tyres that cut off access to the capital. Others occupied the congress, shouting "respect our rights!" and "long civil war!" Smoke wafted over Quito and sporadic looting was reported. At least two banks and several supermarkets were reportedly ransacked. Correa went to a regimental barracks to try to negotiate with protesters but was surrounded and jostled and forced to flee after a tear gas canister was fired at him. Some of those who shoved him were police in full uniform. TV pictures showed a man in a tan suit punching the president and trying to yank a gas mask off his face. Correa was then led away, still wearing the mask. The 47-year-old leftist leader, who recently underwent knee surgery, leaned on a crutch and was later put on a stretcher. A government helicopter tried to evacuate him but was unable to land. Spirited to the hospital, he denounced the mutiny. "They fired gas on us – on the president of the republic. This is treason to the country, treason to their president." He vowed there would be no compromise with the rebels. "They are a bunch of ungrateful bandits. No one has supported the police as much as this government." The foreign minister, Ricardo Patino, led a large, chanting pro-government crowd to the Carondelet palace, the president's home. He urged people to take to the streets to peacefully "reject this coup" and "rescue our president". He added: "We are not afraid of anyone." Later, a defiant Correa was quoted as saying from the hospital: "I leave here as president or they take me out as a corpse." Latin American leaders from across the political spectrum united in support. Venezuela's Hugo Chávez said his Ecuadorean ally was at risk of assassination. The Organisation of American States met in special session in Washington to discuss the crisis. The White House expressed full support for Correa and urged a peaceful end to the crisis. UN secretary general Ban Ki-moon also backed Correa. "The secretary-general is deeply concerned about developments today in Ecuador, including reported acts of insubordination by some members of the police and military," Ban's press office said in a statement."He expresses his strong support for the country's democratic institutions and elected government," the statement said. The head of the armed forces, Ernesto Gonzalez, said troops remained loyal to Correa. "We are in a state of law. We are loyal to the maximum authority, which is the president." There was no immediate evidence of an orchestrated coup attempt. The president's policy coordination minister, Doris Soliz, asked Ecuadoreans to be calm. "This is an act of indiscipline that is going to be controlled. It is being controlled. The military chiefs are completely supporting democracy." Even before the protests, the government's proposed austerity measures had triggered a political crisis in which the president threatened to dissolve parliament and rule by decree until elections. What angered police and elements of the army was a law to end the practice of giving medals and bonuses with each promotion. It would also extend from five to seven years the usual period required for promotions. Correa is a US-trained economist who has tried to trim Ecuador's bureaucracy. His own party, the Country Alliance, opposed the austerity measures, prompting his threat to dissolve congress. The two-year-old constitution allows the president to declare a political impasse and dissolve the assembly until a presidential and parliamentary election. The measure needs constitutional court approval. Correa, who has a Belgian wife, was elected in 2006 promising a "citizens' revolution" to spread the benefits of oil, gas and other revenues to the poor in the Andean mountains, Amazon forests and Pacific coast slums. He defaulted on a $2.8bn (£1.8bn) debt, calling it illegitimate, and boosted spending on education and health. He was re-elected under the new constitution last year but since then public sector workers and indigenous groups, among others, have accused him of breaking promises.