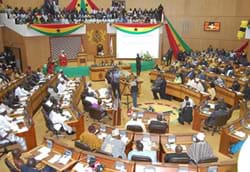 Parliament on Wednesday approved US$ 105,370,177.07 loan agreement between the Government of Ghana and Brazilian Development Bank (BNDES) for the purchase of one Embraer 190 Aircraft for the Ghana Armed Forces (GAF) and construction of a hangar. Mr James Klutse, Chairman of the Finance Committee, who moved the motion for the approval, said BNDES shall be funding a maximum amount not exceeding 85 per cent of the purchase price of the aircraft including spare parts and accessories whilst the remaining 15 per cent will be funded by DF Deutche-Forfait AG Bank of Brazil and Citibank N.A. He said the Committee on the loan agreement was further informed that the Ministry of Defence had also endorsed a proposal from Contracta Engenharia for the civic construction of one Aviation Hangar at a cost of $17.00 million, which was capable of holding three large aircrafts. Mr Klutse said the hangar was also expected to serve as a store room for spare parts and provide offices for the pilots, technicians and engineers, adding; the Hanger included the following operational vehicles, one bus, one fire combat vehicle, one refusing truck, one Aerial Truck, one Aerial Maintenance Work Platform and one Ambulance. He said the Committee recommended that there was urgent need to replac= e the aging fleet of aircrafts of the Ghana Air Force which were due to be faced out. Mr Klutse said the Embraer 190 Aircraft would significantly enhance th= e operations of the Ghana Armed Force, especially in its peacekeeping operations. He said the terms of the agreement include, a finance amount of US$88,370.177.07 for aircraft and logistics, export credit of 85 per cent from BNDES amounting to US$73,370,177.09 including export credit BNDES Insurance of US$4,520,177.09. It has a repayment period of 10 years and a grace period of one and half years with interest rate of CIRR-2+1.05 per cent, structuring fee of US$0.50 flat and a commitment fee of 0.50 per cent per annum. Mr William Ofori Boafo, Member for Akropong Akwapim called on members to suppor t the motion because it would be extremely beneficial to the nation. He stated that in most peace trips to Liberia, Sierra Leone, Cote d' Ivoire, DR Congo and Lebanon, over 6,000 troops must be transported and the government in most cases relied on commercial aircrafts. Mr Boafo noted that the airbus would not assist in transporting the troops but also large government officials on state assignments outside the country, adding that it would benefit those who need urgent medical care. He indicated that the Embraer 190 could serve as an inspiration for young ones to be attracted to the Ghana Air Force. Mr Alfred Agbesi NDC member for Ashaiman said the 2008 arrangements by the NPP to purchase the jets was premature, but now the time had come for them to be bought.