Arrest Akufo-Addo If He Is On Drugs 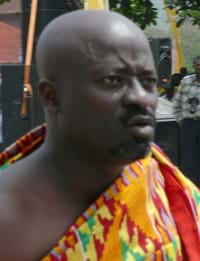 
One of the opposition NPP flagbearer’s lawyers has dared the governing NDC to either have the National Security arrest and prosecute his client for using illicit drugs if evidence abounds to that effect or stop flinging such allegations at Nana Akufo-Addo. Nana Asante Bediatuo of Ampem Chambers told Citi News that the continuous smear campaign against the NPP flagbearer must stop. “If the ruling government and its functionaries and spokespersons, who regularly make these allegations on different media platforms are now in government, and they believe that Akufo-Addo is engaged in drug dealing and drug use, which as we know is a crime then they ought to arrest him” “I think it would be the best example of the fight against drugs in this country if the leader of the opposition, who is a drug dealer or drug addict or drug user is arrested because there is evidence. "Before people can make these allegations or insinuations one would expect that there would have the evidence to back it up. There is a creeping mischief in our social relations in this country which suggest that if somebody makes allegations against a high profile person, that person ought to come and clear their name. I think that is standing the rules or the principles on their head because it is he who alleges that must prove…” The experienced legal officer is quoted by the New Crusading Guide as having threatened to initiate legal action against the Daily Post Newspaper which recently repeated allegations that Nana Akufo-Addo was once arrested at the JFK Airport with narcotics. He told Citi News that Nana Akufo-Addo has not yet given any such orders but indicated that the defaming remarks against the NPP flag bearer’s person has gotten to a head and must be reined in. He says either the ruling party which has constantly used the allegations against Nana Akufo-Addo prosecutes him or shuts up. “If those affiliated with government who have access to the whole state security apparatus are not able to proactively, demonstrate that what they say is true, by making a report to the police, BNI or national security, then they should keep quiet”.