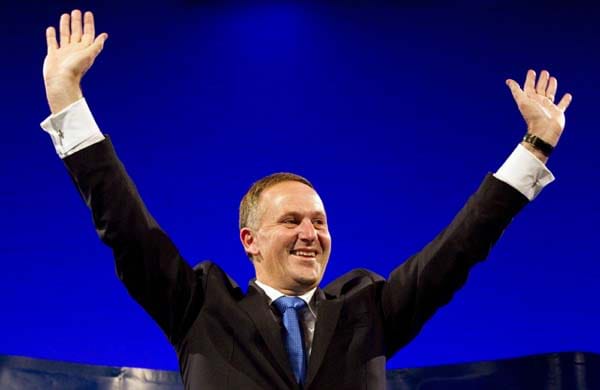 The center right National Party won an overwhelming endorsement for a second term in government Saturday, taking almost half of the ballots cast in the party vote in New Zealand's general election. With almost all the votes counted, the results from the Electoral Commission showed National taking 48 percent of the vote, enough to give it 60 seats in the 120-seat parliament. With coalition allies the Maori Party taking three seats, the right-wing ACT taking one and United Future with another one, National should continue to carry a majority in parliament for its policies. Other winners in the election were the Green Party - taking 11 percent of the vote and exceeding its target of 10 percent - to win 13 seats and New Zealand First, which came back after three years in the political wilderness to take eight seats with 7 percent of the vote. The main opposition Labour Party took 26 percent, giving it 34 seats under New Zealand's mixed member-proportional representation (MMP) system. "It's safe to say we're going to be the largest party at this point," National's chief election strategist Steven Joyce told Television New Zealand just two and a half hours after polls closed. Labour leader Phil Goff told Television New Zealand that the party would be "reshaping" in answer to questions about his future in the post. "It wasn't our time, but we are members of a great political party," Goff told supporters at the end of the evening. "Our time will come again, and we will be ready to take New Zealand forward at that time. We are a bit bloodied, but we're not defeated." The parliament comprises 70 electorate seats - 63 general electorates and seven indigenous Maori electorates - and 50 party list seats. Under MMP, every voter has two votes: one for a political party and one for a constituency member of parliament. Parties need to win at least 5 percent of the party vote or at least one electorate seat to earn parliamentary representation.