I Will Unite Rawlings And Mills-Boakye Gyan 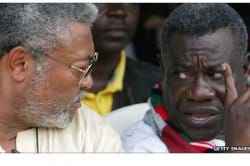 The NDC’s Parliamentary candidate elect for Jaman South constituency in the Brong Ahafo region, Major (Rtd) Boakye Gyan has promised to reconcile the party’s founder Jerry John Rawlings and President Mills ahead of the 2012 general elections. He is convinced that the NDC will need the support of its founder to win the 2012 elections for which reason every effort must be made to get him on the campaign trail. “It is my hope and believe that come 2012 you will see me and the founder and President Mills exploring effectively against the NPP which is our main competitor for the 2012 elections. ” “This is to give President Mills four more years to complete his Better Ghana agenda because there can be no justification for not allowing President Mills to have four more years” he opined. Major Boakye Gyan spoke to Citi News shortly after he won the Jaman South constituency primary, despite the stiff opposition from some elements within the party. The onetime outspoken spokesperson for the Armed Forces Revolutionary Council polled 361 out of total valid votes of 435 representing 81%. His major challenger Mathew Gyasi had 74 votes.