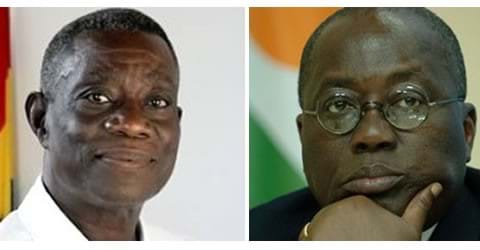 The UK-based Economist Intelligence Unit is predicting a slim victory for the ruling National Democratic Congress (NDC), if the 2012 general elections were held today. According to the Unit's analysis for its monthly review for December 2011, the 2012 election looks to be a repeat of the 2008 election, where President Mills defeated Nana Akufo-Addo by less that 1% of the vote after going to a second round. “Overall, the Economist Intelligence Unit puts Mr Mills and the NDC as the very slight favourites for election victory, although an NPP victory is entirely possible,” it noted. The Unit also took into consideration the recent Synovate poll where both the NDC and the NPP have been quick to jump on the poll results, with the former dismissing the results as doubtful and the latter accepting them as "encouraging". The Synovate poll, conducted in September 2011 put Mr Akufo-Addo ahead, with 48% of those surveyed intending to vote for him compared with 41% for Mr Mills. This national figure masked regional variations. For example, Mr Akufo-Addo was behind Mr Mills in the Greater Accra Region, with support of 37% to Mr Mills' 46%. Greater Accra is a key region in any presidential poll, given the size of the population. The Economist Intelligence Unit noted that similar polls carried out before the 2008 elections showed a similarly close race, further lending credence to the notion that 2012 will be little different. The powers of incumbency are not as significant in Ghana as in most other countries in Africa, with an established pattern of the ruling party being evicted from power, it noted. However, the report said, the NDC is likely to be given the nod because Ghanaian electorate do tend to give those in power two terms before evicting them. It described as a “relatively populist” the 2012 budget which comes at the back of the NDC taking advantage of incumbency to control the early oil windfall and high commodity prices. “Nevertheless, there is also a downside to being the incumbent, as popular expectations of what oil and strong growth will bring tend to verge on the unrealistic,” it pointed out. The Economist Intelligence Unit also cited the continuous criticism of the Mills-led government by the former president, Jerry Rawlings, for their inability to deliver on the election promises of 2008; Mr Rawlings said the Mills government is acting like it is still in opposition. “The actions of Mr Rawlings continue to call into question how active he will be in the NDC's re-election campaign for the 2012 election and whether or not he can realistically endorse Mr Mills given the level of criticism that he has levelled at the president in recent years.” According to the Unit, Mr Rawlings, who is the founder of the NDC, influence on the party does appear to be on the wane, highlighted by the heavy defeat of his wife, Nana Konadu Agyemang Rawlings, at the NDC party congress in July, when she challenged Mr Mills for the party's presidential candidacy in the 2012 election (August 2011, The political scene). “Some NDC members have started to accuse Mr Rawlings of getting closer to the NPP, although this would seem an exaggeration given Mr Rawlings' bitter history with the opposition party and its former president, John Kufuor. However, Mr Rawlings' attacks on the president are proving to be valuable for the NPP, as they can point to the attacks as proof of Mr Mills' ineffectiveness, especially as the attacks are coming from the NDC founder himself.” "In addition, the very public tensions within the NDC (illustrated by Mr Rawlings' attacks on Mr Mills), threaten to further undermine the attractiveness of the party. For the moment, the NPP's poor fiscal record while in office and the large fiscal deficit inherited by the NDC upon coming to power do not appear to be featuring heavily in the minds of the electorate. While the political fight remains focused on the NDC's problems and possible failings, the ruling party will continue to be put on the defensive."