Konadu Rawlings To Run For President 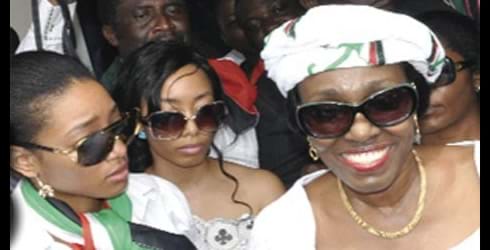 Former first lady, Nana Konadu Agyeman Rawlings is all set to announce her candidature for the flagbearership position of the newly certified National Democratic Party (NDP), a breakaway party from the NDC. Barring any last minute change of mind and surprise, the president of the 31st December Womens’ Movement and a former Vice-Chair of the NDC, Nana Konadu Agyeman Rawlings will next week be outdoored as the sole presidential candidate of the NDP for the December 2012 polls.

This follows the inability and or refusal of the governing National Democratic Congress (NDC) to heed to her ‘last chance’ offer of making her a running mate to President John Mahama in the upcoming presidential elections. Early last week, The Al-Hajj reported that the NDC founders’ wife has offered the NDC a ‘last opportunity’ to redeem itself by demonstrating reverence to the founder and re-embracing the party’s egalitarian values or risk going into opposition. Nana Konadu, said to be the brain behind the formation of NDP which she intends using as a bargaining-chip, warned the NDC to be prepared to lose the December elections if she is not named as John Mahama’s running mate because she would run for president on the ticket of the NDP.

Latest snippets of information provided by the Interim National Chairman, Josiah Aryeh has yet given the strongest indications, the former first lady will lead the NDP. Responding to questions from Joy News last Friday about Nana Konadu’s participation in the formal launching of the party, Mr. Josiah Aryeh who had hitherto, deafeningly dismissed any speculation of the Rawlingses involvement in the NDP now had this to say: “Well, we are making approaches of certain people; if you like we are trying to even head-hunt individuals…” “We will over the next week or two, be able to tell you categorically which particular individuals we have head-hunted or approached and who agreed to be part of us,” he stated. Earlier last week Tuesday, Nana Konadu’s office had sent out invitations by telephone to some selected media houses directing them to converge at the office of the former First Lady Nana Konadu Agyeman Rawlings at North Ridge, to a program under the auspices of the NDP. Reports by The Herald newspaper reveal. According to the Heralds’ report, invitation to the various media houses came from a female lady in the offices of the 31St December Women’s Movement, who asked them to dispatch reporters to the office to be conveyed to another location for an NDP progamme the next day. However, the reporters who were on their way to the 31st December office were called on the mobile phones number 024672977*** by the same female and told to return to their various offices because the programme had been cancelled. They were told that they would be called and informed of the new date. No reasons were assigned for the cancellation.