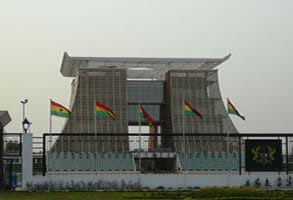 
The National Security Advisor to the President, Brigadier General Nunoo Mensah (RTD) says the newly constructed seat of Government; the Golden Jubilee House is not safe enough to serve as the seat of government. The magnificent edifice constructed by the erstwhile Kufuor administration was reportedly built without facilities for security officials. A blunder General Nunoo Mensah describes as an unpardonable aberration on the part of those who conceived the idea. The NDC Government disclosed on Thursday, October 1, that an additional $ 35 million is required to build a residential facility for security officials at the palace due to the failure of the Kufuor government to build one. In an exclusive interview with Citi News, General Nunoo Mensah said the Golden Jubilee House is not an ideal place for President Mills to occupy. He contends that the Christanborg Castle, which currently serves as the seat of government is more appropriate to serve as the seat of government because it provides adequate security for the president. “In my personal view, I will prefer the castle to be the seat of government. "The castle on one side has the Atlantic Ocean which provides ample security for the President…It is well protected as well as the fact that it is a very quiet place as opposed to the new presidential palace which is right in the middle of Accra with all the traffic built up in the area. My view is that it’s not ideal." He said The National Security advisor added that “the main office of the President, located by the roadside is not secure. It should have been hidden inside the property and not to be seen from the road as you drive along.” He is however of the opinion that since the nation has already spent money on the construction of the palace, “ we have to find a way of dealing with the problem and use it.”.