I Am Not For Mills | Konadu Rawlings 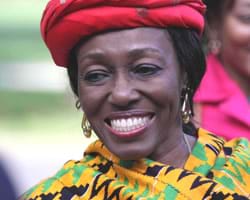 
The attention of Nana Konadu Agyeman-Rawlings, former First Lady has been drawn to a series of publications in the media distorting a statement she made at the handing over and induction ceremony of the Accra City Campus of the Tertiary Education Institution Network (TEIN) of the National Democratic Congress (NDC), last Wednesday. Mrs Agyeman-Rawlings wishes to state categorically that she did not make statements on the fortunes of President Mills against Nana Akufo-Addo. Another member of the panel at the ceremony made the statement about Akufo-Addo going into retirement in 2012. The former First Lady is also shocked that Deputy Minister for Information, Sam Okudjeto Ablakwa who was at the function and heard her comments gave credence to the distortions by stating on Metro TV on Friday morning that she spoke of the fortunes of President Mills in the 2012 elections. The thrust of Mrs Rawlings speech was based on the future of our youth and the need for them to recognise their roots and work hard to leave a grand legacy for the next generation. She quoted Rumoko Rashidi who said: “History is a light that illuminates the past and a key that unlocks the door to the future” and called on TEIN members to trace the history of the NDC, its objectives and why the Student Network was established as a branch of the party. Ghana, Nana Konadu said, was a collapsed state economically, politically and socially at the time the PNDC came into being but “through diligence, commitment and political astuteness we were able to turn Ghana round”. She went on to rally the students to appreciate that it was their turn to make an impact on Ghana’s socio-political development saying, “your time is now!” The objective of politics, Nana Konadu added, is social contentment in terms of good education, social infrastructure, health, housing and employment. She lamented that poverty and hunger in developing countries is due to selfishness, lack of solidarity, and above all poor governance and called for change in our attitude in order to restore people’s faith in politics. She concluded by calling on the youth to grab the opportunity to change the destiny of Ghana by developing their skill, taking on the burden of development and sacrificing for the future generation. “Our youth is our future but they can only be our future if we empower them adequately,” Nana Konadu stated. Mrs Rawlings is calling on the offending media and personalities including the Deputy Minister for Information, Sam Okudjeto Ablakwa, the Ghana News Agency, the Daily Graphic, The Ghana Palaver and the Daily Post to double check with actual recording of her statement and correct the distortions which have been given nationwide coverage. The former First Lady says she is aware of the deliberate distortion of facts involving her husband, former President Rawlings and herself, describing the nationwide distribution of a photograph of President Mills and the former President sharing a joke recently as shameless and spineless political agenda.