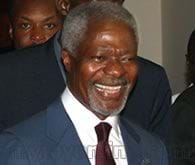 
A negative aspect of African politics, referred to locally as the "pull-him-down" (PHD) syndrome, has attracted harsh comments from a former UN Secretary-General, Busumru Kofi Annan. Speaking in Kumasi, Mr Annan deplored the way and manner in which African governments took delight in undoing the work of their predecessors for political advantage. He noted that instead of focusing how to build on the good initiatives of their predecessors, governments sometimes spent half of their terms to dismantle the work of their predecessors, with the intention of making them unpopular. He was speaking at a dinner hosted by the Asantehene, Otumfuo Osei Tutu II, in honour of the visiting UN Foundation Board of Directors, including the Founder and Chairman, Mr Ted Turner, at the Manhyia Palace on Thursday October 21. Mr Annan said before African governments could come to terms with the reality on the ground, they would be left with the remaining period of their tenure, which would be too short for them to work to better the lives of their people. He stated that the situation was a disincentive to development efforts and should be discarded, emphasizing that regardless of which party was in power, efforts should be made to continue with viable projects and programmes inherited to help accelerate the development process. The UN Foundation, a public charity was created in 1998 with entrepreneur and philanthropist Ted Turner's historic $1 billion gift to support UN causes and activities. The board members, who include some of the world's most respected leaders in health and development, were in the country to see the progress of Millennium Development Goals (MDGs). While in Kumasi, they toured the Komfo Anokye Teaching Hospital (KATH) to see how they could address the challenges confronting hospital. Mr Annan said the Foundation had worked with Ghana with the sole aim of assisting the country to achieve the MDGs. He said in the government's quest to achieve the MDGs, it needed to build on past progress, devoid of political considerations. The Juabenhene, Nana Otuo Siribuo, who welcomed the guests on behalf of the Asantehene, commended the board for its initiatives, which had gone a long way to bring hope to a number of people not only in Ghana but also parts of Africa. He said Otumfuo was always looking for development for the people of Asanteman and Ghana as a whole and would, therefore, welcome efforts that would change the lives of the people for the better. Earlier, during their visit to KATH, the Head of Obstetrics and Gynaecology at the hospital, Dr Archer Tempim, who briefed the board members, said congestion was the major challenge confronting the hospital.