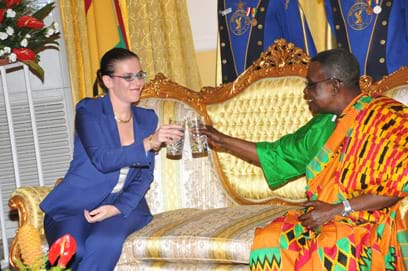 
Ghana renews diplomatic ties with Israel Nearly four decades after severing ties in wake of Yom Kippur War, Israeli Embassy reopens in Accra Ghana and Israel have renewed their diplomatic relations some 38 years after mutual ties were severed in wake of the Yom Kippur War. The Israeli Embassy in Accra, the capital city of Ghana, officially reopened last week. For the past four decades, Israel and Ghana maintained only basic ties, through Nigeria. "It's hard to describe the sense of pride we felt, standing here with a local orchestra playing the anthem and seeing the flag flying in the background," newly appointed Ambassador to Ghana Sharon Bar-Lee told Ynet on Wednesday. Following the ceremony, the Israeli mission to Ghana presented its credentials to President John Evans Atta Mills, at his bastion. "The presidential bastion towers over the area. A red carpet was laid out on the stairs and on the sides of the road, we were greeted by 'talking drums' – when you play them the sound they make sounds like actual syllables, and they played the word 'Israel.' There was an electrifying vibe in the air," Bar-Lee said. After President Mills accepted the ambassador's credentials, he told the mission that Ghana has a large Israeli business community. "Ghanaians love Israel. It's not unusual to see cars with Israeli flags on them," she added. According to Bar-Lee, Israel currently has two ongoing projects with Ghana, in the fields of medicine and children's education. "Israel has two major brands in Ghana – Golda (Meir) and Jesus. There is true religious love and friendship for Israel," Bar-Lee concluded. Meanwhile, the Foreign Ministry announced that Israel will be sending medical aid to Nairobi, Kenya, where over 100 people were killed and hundreds were wounded in a gas pipe explosion. Israel will be sending over 360kg of medical supplies, including specialty supplies for the treatment of burns, to Kenya. The shipment is expected to arrive by Thursday night.